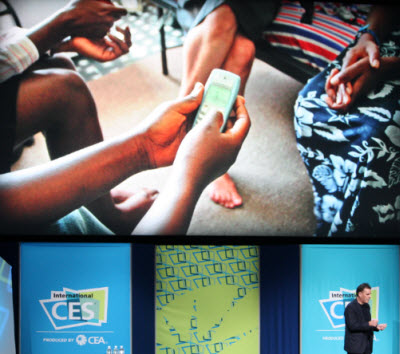 Nokia chief executive Olli-Pekka Kallasvuo says that, while the tech community is very focused on smartphones, the world’s biggest cell phone maker has sold more than 750 million basic phones in the emerging markets over the last five years.

And while smartphone users may have a lot in common, he says that a one-size-fits-all approach doesn’t work in the rest of the world. That’s the theme of his speech at the Consumer Electronics Show today in Las Vegas.

It’s no secret that Nokia has had a tough time getting traction for its smartphones in the U.S. against competition from Apple’s iPhone. But Nokia has fielded lots of local teams to research markets around the world and has found that it has to help make local solutions viable to increase phone usage. One of the company’s cheapest phones, the Nokia 1616, costs around $32. That amounts to a month’s wages in many countries. Yet it sells in huge numbers, thanks to customized services that make it far more useful in emerging markets.

Kallasvuo noted how far the industry has come since Nokia introduced a $6,000, $1 per minute cell phone in 1987. He notes that there are interesting divergences around the world. In Ghana, there is a hack that allows a phone to have two SIM cards, or unique identifications. There are many places in Africa where entrepreneurs operate phone-charging stations, as many people have no access to home electricity.

In India, Nokia has set up a system, Progress Project, to allow small business (like farms) to send transactional data back and forth via text message. So whole businesses are running on cell phones, with farmers in rural areas able to auction off onions in western India. There, the phone serves as the banking system, currency provider, and marketplace. Last year, the company introduced Nokia Money to bring together payments on a global scale. The service isn’t tied to a single bank, carrier, or country. It’s important, Kallasvuo says, because 75 percent of the world’s people still haven’t sent an email.

Through Nokia’s Ovi Store for mobile apps, Kallasvuo hopes that developers will create many more apps that can be useful in different regions of the world, from Sesame Street educational phone apps to local business directories.

“I firmly believe we have only scratched the surface of our ability to do business and do good in the world,” Kallasvuo said.

The company is putting money behind this interest in the emerging world. It is creating the Nokia Growth Economy Venture Challenge, awarding the entrant with the best ideas for the emerging markets a $1 million investment from Nokia. The winner will be announced in June. The competition’s web site is CallingAllInnovators.com.