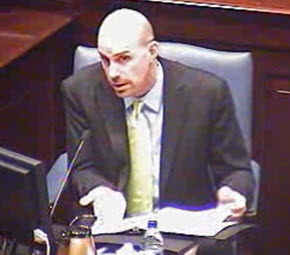 Skype’s free voice and video calling on the Internet is threatening incumbent companies who charge for that now. And those companies, such as Comcast (he didn’t mention Comcast by name, but we all know he was referring to that giant cable company, as well as other major carriers), don’t want Skype users , wh0 are a minority of the network users, to take up a lot of their bandwidth without paying for it. So the question is what the government should do to foster innovators such as Skype without damaging the network owners to the point where all innovators suffer.

Silverman said today’s debate between network owners and network app makers reminds him of history. He made the remarks at the leadership dinner at the Consumer Electronics Show in Las Vegas, in front of industry leaders and lawmakers.

The debate over disruptive innovation goes back to when Henry Ford invented the first mass automobile. In the early 1900s, Pennsylvania passed a Red Flag law that required any “horseless carriage” to be preceded by someone carrying a red flag to warn horses, livestock and others that something disturbing was coming their way, Silverman said. The analogy today is that carriers and other interests don’t want an unfettered Skype — and its free voice and video-calling benefits — to burden their networks with unpaid traffic.

Silverman said that progress in technology is incremental, until it isn’t. Users have articulated needs, like how they want longer battery life and cheaper goods. Innovation that delivers on those needs is incremental. But every now and then, unpredictable changes happen where new inventions address unarticulated needs. For instance, Silverman joked that it would be nice to know who is going to a dinner before deciding whether or not you want to attend it. If someone invented a way to do that, it would be a big hit. No one foresaw that Skype, launched in 2004, would now have 520 million users worldwide.

Skype, which has recently been liberated from its owner eBay in a spinoff, is growing like gangbusters. Silverman said in the month of December alone, Skype users used 5 billion minutes of video calls on Skype. Now Skype is moving forward with high-definition video calls on TV. This week, both Panasonic and LG Electronics said they would build Skype software into their web-connected TVs to enable video calls in the living room.

But Silverman doesn’t want any red flag laws to slow down the innovation of Skype. Silverman said he was pleased with a talk by Julius Genachowski, chairman of the Federal Communications Commission, the federal agency that oversees policy related to communications. Genachowski favors an open Internet and Net Neutrality, where innovators should be free to use and innovate upon the communications networks.

“For the first time, we are seeing communications policy articulated as innovation policy, and that is a welcome change,” Silverman said.

But a cable industry executive came up to me and expressed his frustration with Silverman’s view. Right now, the executive said, it isn’t fair that Skype uses so much bandwidth on a cable or phone company’s data network and doesn’t have to pay for it. That takes away the incentive from the network owner to invest in and improve the network, because it only means that Skype will expand to use more of the bandwidth. And if Skype ruins the network, then all others who want to innovate can’t use the network for their own innovations. It’s good to encourage innovators, but five percent of the users shouldn’t ruin the network for the other 95 percent. Or so the network owners say.

Silverman said the keys to innovation policy should include universal, affordable access to the network. He also said there is a compelling and obvious need for new spectrum. This needs to include allocation currently set aside for broadcast. And he said it’s import to have a free and open Internet.

He said, “If we get the policies right, we can unleash a new era of innovation.”