I could start this by saying all the cliche stuff about it like:

The game features 16-player online battles. Players can upgrade skills that their character can use such as hacking, CQC mastery, tomfoolery, enhanced lock-on, and more, all of which can be leveled up. The player can keep tabs on allies and enemies with nanomachines.

Players will have the ability to “hack” another player’s character to steal information from their nanomachines, such as the locations of his/her allies. This is how the SOP system from Metal Gear Solid 4 is implemented as a gameplay feature in MGO.

There will be over 70 different weapon customization options.

Which on paper sounds great, this sounds like an amazing online game that will combine the MGS4 gameplay in an online setting. What could go wrong?………..lots of things.

I first played this when the Beta hit all of Europe, I stayed up till 1am so I could be there to log in and see what all the fuss was about. Thankfully, the Beta programme was relaesed for download by Konami the week before through the PS Store and my 1.5gb file was downloaded and installed, all I needed was Kojima Productions (KP) to switch on the servers.

Like a scene from a Chevey Chase film, where he spends all day to put up his xmas decorations around the house, he waited till it was dark, then he flicked the switch and so did KP, then like the xmas lights the shun like the second coming of Jesus, then *POOF* the fuse blew, the server crashed.

It would be a week before they would get the service up and running. We had a whole new update and that took ages to download. I do remember a youtube vid of someone downloading the Beta, and then throwing a hissy fit when he found out that the update was the same size as the intital download.

Now if you thought that was a hurdle, Konmai decided to take there already shot foot and place it over its good foot and shoot it again by having two words on the screen “Konami ID” Yes your PSN ID was useless for MGO, you had to create a new ID and then create a GAME ID before you could play, thankfully I had this done a few days before hand, but for alot of people who decided to get one on the day of the Beta, the Konami ID site crashed and burned like an experiment from Top Gear, to quote Clarkson, Konami were “ambitious…yet rubbish.”

When I finally got playing the game I thought it was OK, it had potenital but was still cutting it’s online teeth, and from games like PES we can see that Konami still hasn’t quite figured out online anyway. So I played the game for the Beta. Then of course I got MGS4 when it came out, it was the main reason I bought a PS3. So once I completed MGS4, I started back into MGO. Thankfully my Konami and Game ID still worked, and the site was back working too. So I played it for about a month and like most games, just moved on to something else.

Even though I was not playing it, I would every now and again boot it up and see if I needed to update it, one of these updates, the one that allowed the use of the PS Store to buy extra content took 9 hours 30 minutes, I timed it. The update system uses a peer to peer service that means that the more people that are updating at once the faster it takes, and this update would crash more times then I care to remember, but if it did crash and you restarted it  would restart from the point of the crash (e.g. 25% or 80%).

So after all this hastle, I decided about a month ago I was gonna give MGO another try. When I loaded it up, it worked, perfectly, but because of the above problems alot of people were turned off and the number of players playing were small, mostly french people, there’s my hardcore challanege, play a online team based game, where team work is part of the gameplay in French, which French people, Canadians don’t count.

From reading online fourms about the game and chatting to my friend Nanaka, I figured the best players in the world/where it is most played is Japan. The problem is that MGO is regioned locked. So to play on the Japanese servers I need the Japanese version of MGS4, but thankfully, MGO was released as a stand alone product in Japan, and I got my copy of it last week ^_^ 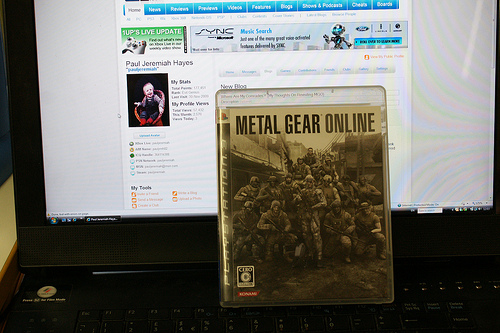 So is there a big difference between the European servers and the Japanese ones? Hell Yeah. At first I was seriously getting my ass kicked in every game. The Japanese players use CQC far more then European players who prefer to run and gun, pretty much play it like Call Of Duty. So over the past week I have leveled up to level 5 and I am now playing the game as it is meant to be played. It’s slower and more precise. I remember a few weeks ago on 4-Guys-1up they had the Street Fighter Community Manager, Seth Killian, on and he said that the best way to get better at Street Figher is to play the pros and I totally agree. To be the best at something you have to have your ass handed to you by the best. My lesson has been learned and I think that I have moved forward as a gamer too.