Here are our photos that capture some of the experience of attending this year’s Consumer Electronics Show in Las Vegas. 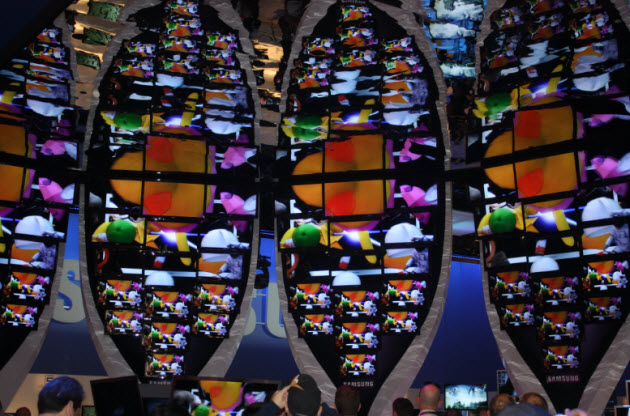 Samsung’s booth had a spectacular display, made up from many smaller displays. Classical music came from the ceiling and created a cone of beauty amid the noisy show floor. 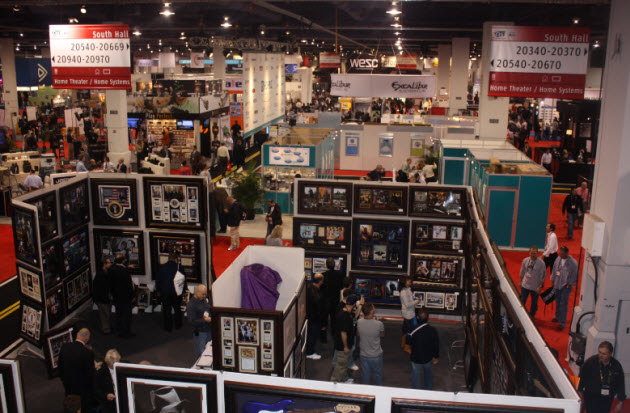 The crowds were bigger this year. As of Friday night, more than 112,000 people had come through the show at the Las Vegas Convention Center. By the same time a year earlier, only 92,000 had attended, according to Gary Shapiro, chief executive of the Consumer Electronics Association. The official show attendance results will come later. 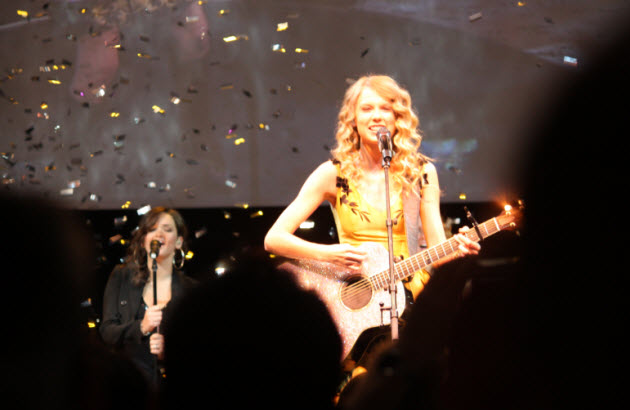 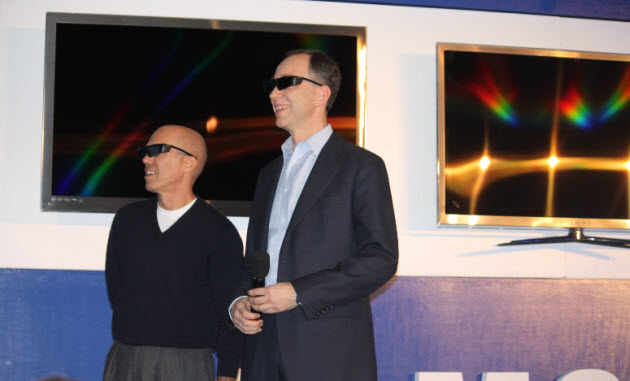 Jeffrey Katzenberg, chief executive of DreamWorks Animation, and Frederic Rose, CEO of Technicolor, came on stage at Samsung’s press conference to talk about their alliance to advance 3-D viewable movies in the living room. 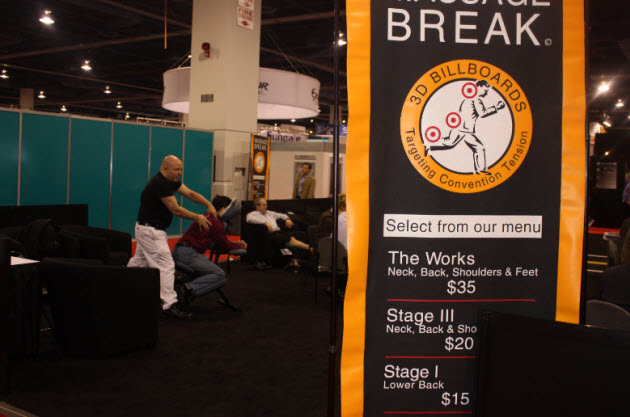 Traveling the show floor over the five days of CES is a grueling experience. Dean had more than 40 appointments and events to attend during the week. If he wasn’t so busy writing 52 stories, he might have stopped to get a massage too. Anthony could have used a massage too, after lugging around the equipment needed to stream live video from the conference. 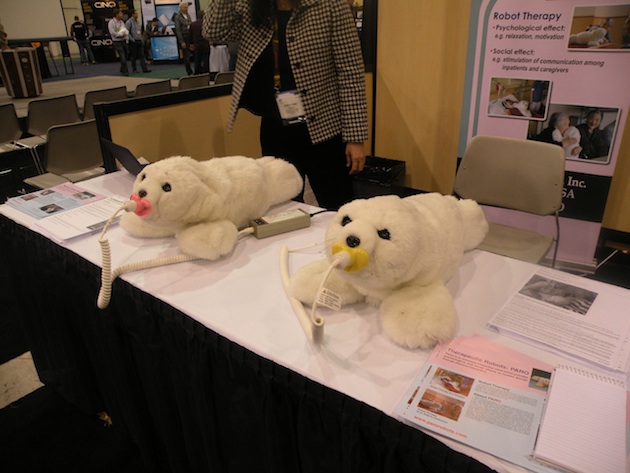 These robotic seals from Japanese company Paro are supposed to be therapeutic, particularly for patients in living situations where they can’t have pets. The seals are even cuter in person, because they blink, make squealing noises, and respond to your voice. 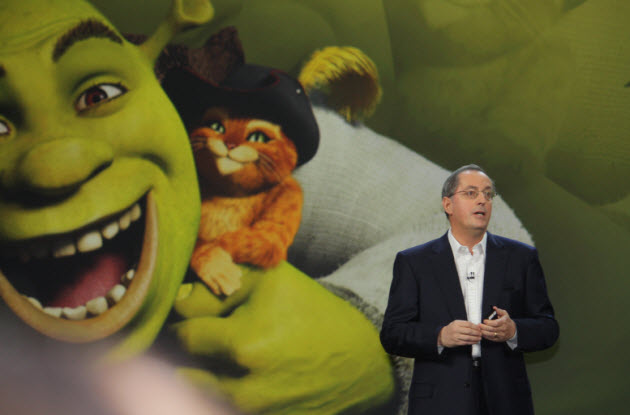 Paul Otellini, chief executive of Intel, had a good show. The night before, Microsoft CEO Steve Ballmer had a long delay before his opening keynote, but Otellini’s went off without a hitch. Intel introduced 25 32-nanometer microprocessors, showed off its Intel Wireless Display technology for displaying a PC’s screen on the TV, unveiled Intel’s AppUpStore for creating white label app stores, showed off its Light Peak technology for speeding data transfer, and said that 3-D rendering of movies such as Shrek 4 will be great for processor demand. 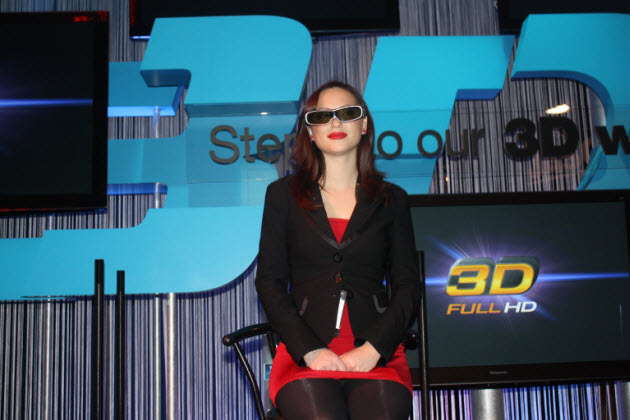 Full 3-D on the TV was one of the big trends of the show. This woman got to sit in a chair all day as folks walked by and ogled the many screens surrounding her at the Panasonic booth. 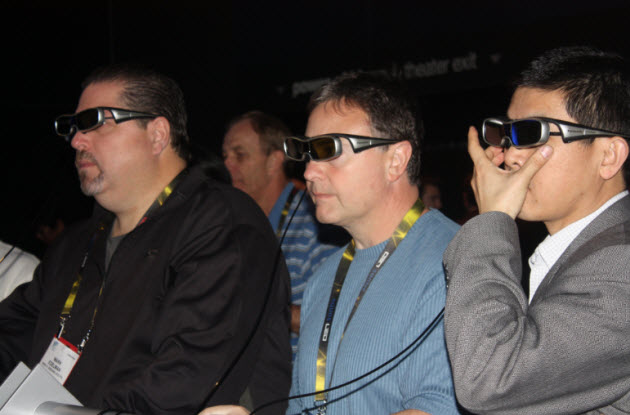 No, these folks are not ogling the woman above. They’re actually in one of the many other booths that showed off 3-D. 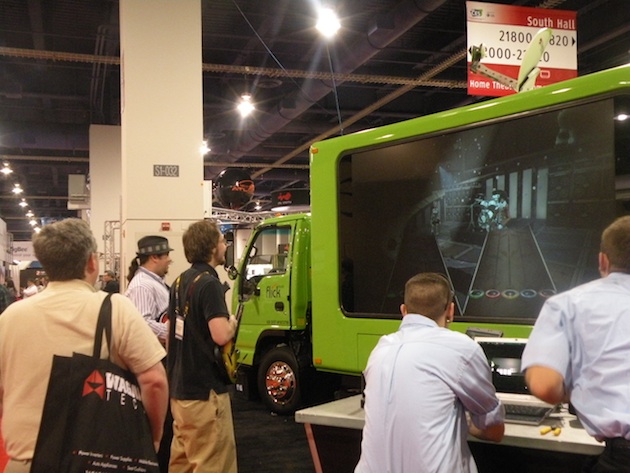 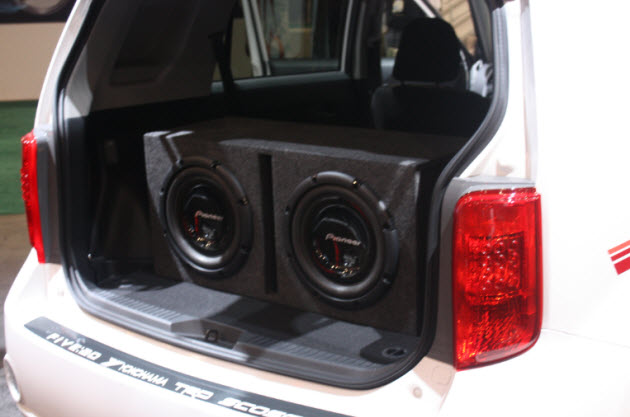 CES’s North Hall is still full of sites like this car at the Pioneer booth, where gigantic speakers in the back of an SUV are not such a rare thing. 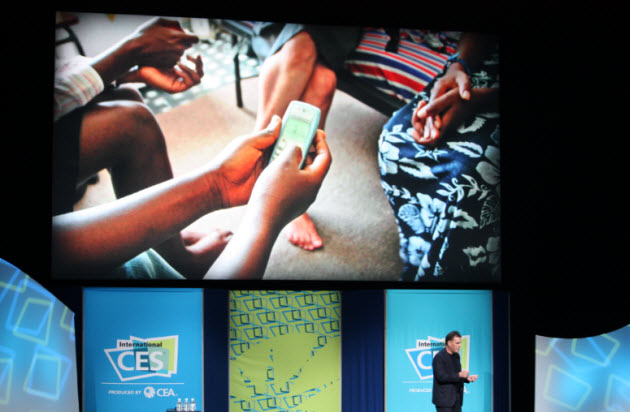 Olli-Pekka Kallasvuo, chief executive of Nokia, gave his keynote speech audience a tour of the developing world and how cell phones have become the heart of commerce for farmers in rural countries and just about everywhere else. 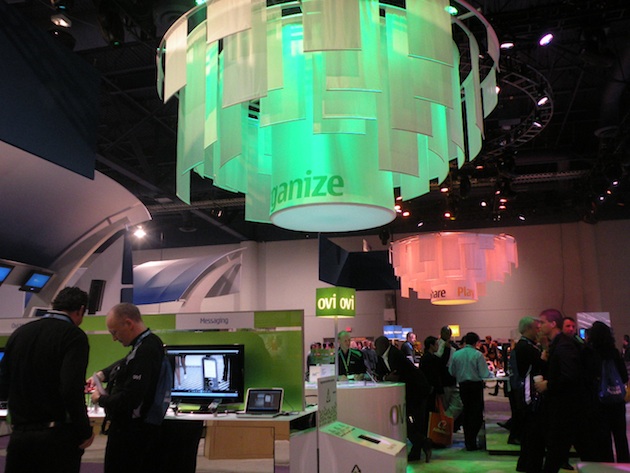 Speaking of Nokia, their booth at CES was one of Anthony’s favorites, in terms of visual flair. If only more of Nokia’s phones looked this good. 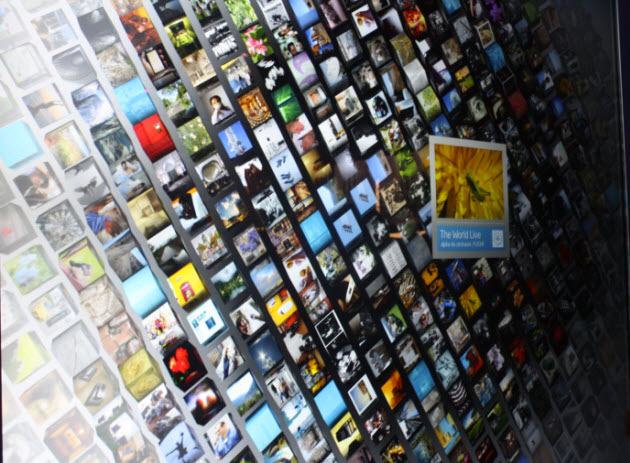 Intel’s booth had a live demonstration of a new way of looking at photo collections or web sites. You could touch one of them to get a bigger view of the photo and information about it. It’s one example of a way to organize a ton of information that is coming your way in the digital future. 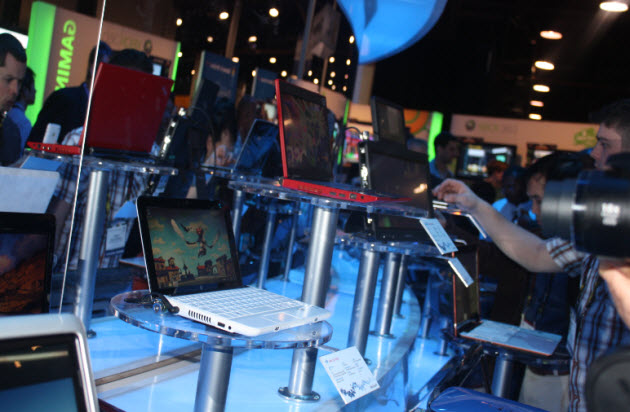 CES has always been a celebration of big screens, especially with TVs. But now companies are bragging about how thin their screens can be. Laptops and netbooks are getting thinner and lighter. Here’s a selection that shows you from an angle just how rail-thin these models are. 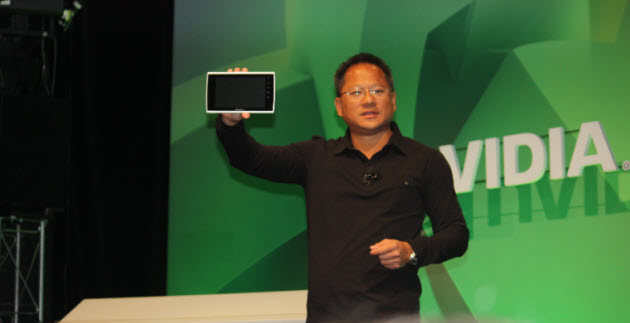 Jen-Hsun Huang holds up a model of an upcoming tablet computer. There were scores of these on display at CES. Nvidia’s Tegra 2 will be the brain of some of them, but others will run on chips such as the Intel Atom, Marvell Armada, or the Qualcomm Snapdragon. 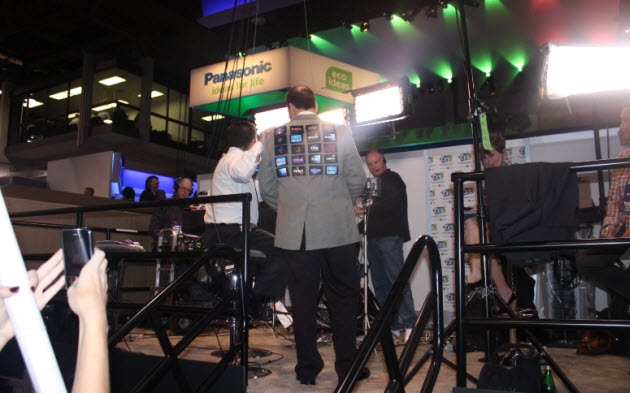 This guy was getting interviewed on TV. You’ll notice his jacket has a bunch of little LCD screens, each of which was playing a different video. The things some people do to get attention. 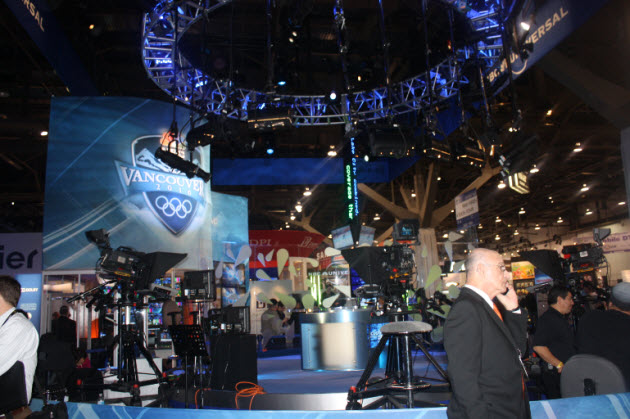 CES isn’t just about gadgets. It’s about the content you put on them too. NBC’s booth showed off the Vancouver Olympics shows that it will broadcast in high-definition. Some of the content owners are also talking about broadcasting their shows in 3-D as well. 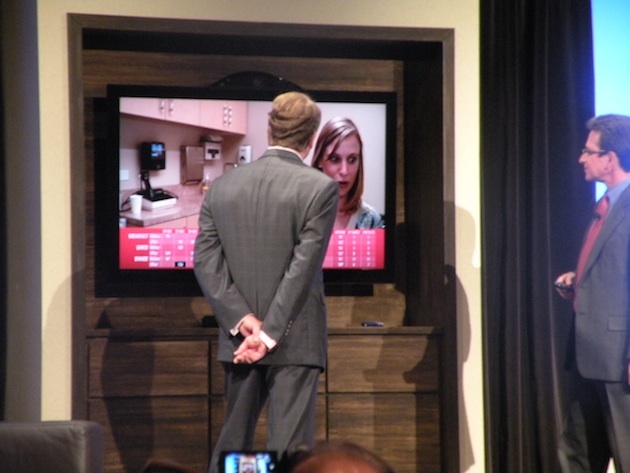 Las Vegas can encourage some unhealthy habits, especially if you’ve got a full conference schedule and don’t have time to sleep or go to the gym. Here, Cisco chief executive John Chambers and another company executive take advantage of Cisco’s TV telepresence services to consult a health advisor. (She told them to get more exercise.) 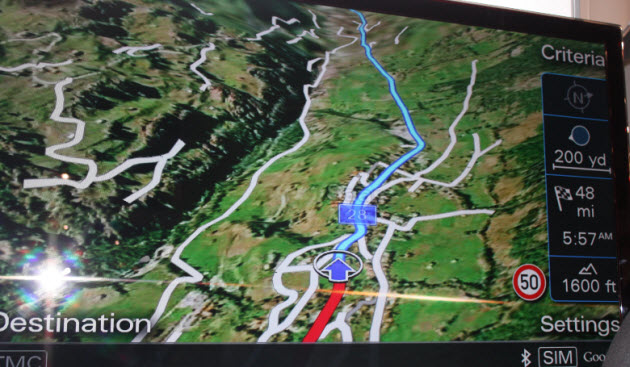 Navigation systems are popular, but that doesn’t mean that the industry is done creating maps. Here’s an example of a better looking map for a navigation system. 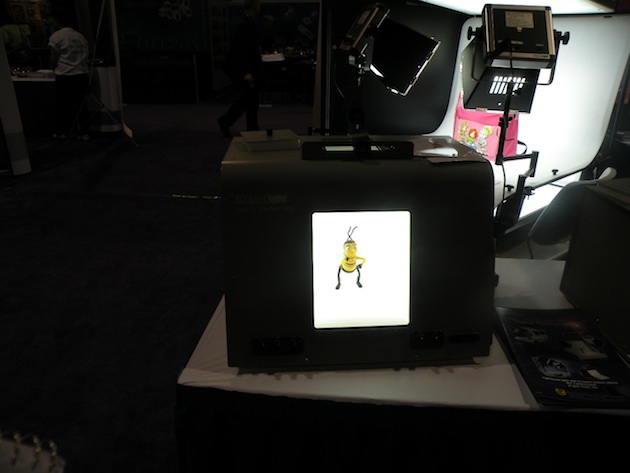 We were just drawn by the sight of a cute bug trapped in a stark white prison, but Tokina’s digital imaging box is supposed to be useful for photographers who want to take pictures without shadows. 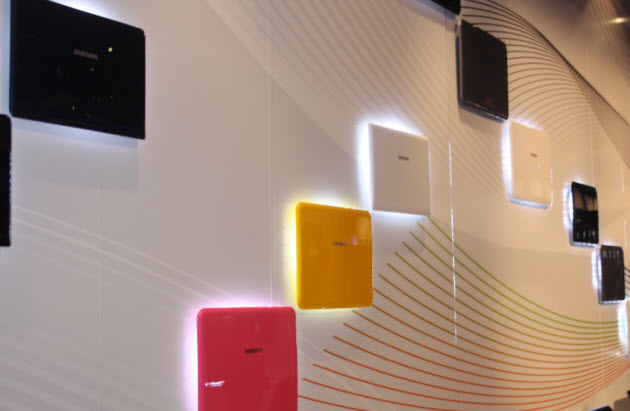 Are these works of art or fashion? Nah, they’re netbooks. But the presentation of these devices in the Samsung booth shows that the company’s designers are thinking about people who want stylistic industrial design.