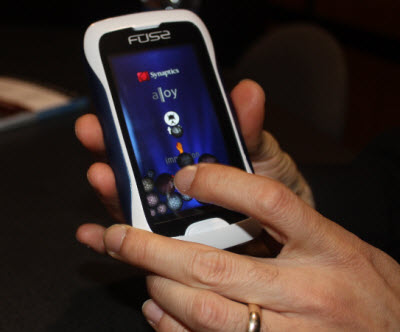 Interface development company Synaptics came to the Consumer Electronics Show to show off Fuse, a new way to control a cell phone through the combination of touchscreens, force feedback, tilting, and 3-D graphics. It also showed off Scrybe, a new set of gestures that you can use to make things happen on your computer quickly and easily.

Apple got us all used to the touchscreen swipe and the tilting control mechanisms with the launch of the iPhone. But now it’s time to move beyond that, said Andrew Hsu, technology strategist at the Santa Clara, Calif.-based company, which makes touch pads, touch screens and other sensors.

With Fuse, you can use a number of different methods to control a phone, making it much easier to handle a lot of functions with just one hand. You can swipe across the multitouch screen. You can squeeze the side sensors and tilt the phone to make things move onscreen. And swiping your finger across the back of the phone also lets you control things. This is what Synaptics calls a “multi-modal interface.”

Fuse is a result of collaboration between Synaptics and four partners: TheAlloy, The Astonishing Tribe (TAT), Immersion, and Texas Instruments. TheAlloy led the user experience and overall product design efforts. TAT enabled the effective 3-D environment and helped with the user interface. Immersion made possible the tactile feedback. TI’s OMAP 3630 processor provided the processing platform to handle things like graphics and imaging features. And Synaptics used its ClearPad, NavPoint, and TouchButtons sensor electronics in the design.

Scrybe, meanwhile, is a collection of finger gestures that you can use as short cuts to get things done with your computer. It’s akin to finger-painting. First, you tap on the touch pad to get a touch canvas on the computer’s screen. Then you use your fingers to draw gestures to control functions on the computer. You can, for instance, draw an “@” symbol on the screen to launch your email. It’s another cool way to replace lots of keystrokes with simple gestures. These aren’t products per se, but expect them to inspire the creation of a whole new generation of cool phones, computers and other gadgets. I wouldn’t be surprised to see something like Scrybe on Apple’s upcoming tablet, or on all of the other tablets that were displayed at CES.

Check out the video we took at CES with the Synaptics crew.