Google’s acquisition of AdMob last November pulled the mobile advertising industry into the spotlight. Until then it had mostly been seen as the poor relation of Internet advertising in terms of revenue, if not of hype. Yet mobile offers advertisers many attractive possibilities. No other device is as personal, interactive and constantly within reach as a cell phone. And cell phones let advertisers target whole new parameters, such as location and context. So will 2010 be the breakout year for the mobile advertising business?

Mobile ads can be delivered in the form of messages like SMS and MMS, banner and full-page ads on Mobile Internet sites, mobile search ads, in-application advertising and mobile video. Mobile ad impressions are generally bought at cost per thousand (CPM) or cost per click (CPC). The main measures of success are the number of users reached, click through rate (CTR) and the number of actions — for example, number of downloads — prompted by the ad. SMS and MMS are still considered the most effective advertising channel, with correspondingly higher pricing. Most users will read at least part of an SMS received.

Mobile ad networks distribute mobile ads to publishers like mobile websites, application developers and mobile operators. The cheapest way to advertise is via a blind ad network where advertisers can’t pick specific publishers but can often target by country and content channel. Admob and InMobi fit into this category. Premium ad networks like AOL or Nokia focus on a limited number of prestige publishers like mobile operators and specific big-traffic sites, and the advertiser pays extra to target those sites specifically. Some larger publishers and mobile operators run their own ad platform, like the one supplied by Amsterdam-based startup MADS. There are also many small players who supply niche services. Mobclix, for example, is an ad exchange startup targeting smart phones via multiple ad networks. Finally, there are the publishers themselves such as eBuddy, maker of one of the most popular mobile IM applications. 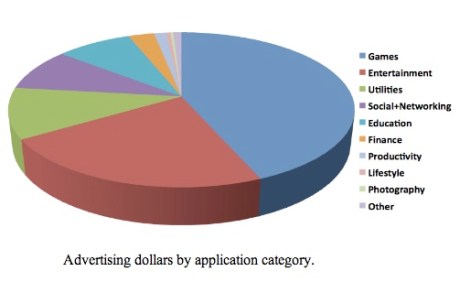 Where Is the Money?

The US mobile ad market was estimated to be around $416 million in 2009. While the majority of US mobile ad spending still goes to messaging like SMS, spending on applications and search is on the rise. MADS Sales Director Jasper de Vreught says, “We do see a development where the average spend per campaign is significantly increasing. CPC will become more important, whereas in the premium model, CPM is now still the predominant charging model.“

Mobclix supplied me with a document of data (not shown here) on the highest yielding application categories in October 2009. This data was from 4000+ applications with a 70% reach across iPhones and iPod touches.

One of the most attractive characteristics of mobile for advertisers is the opportunity for more accurate ad targeting. Typical parameters include carrier, device type and mobile channel, with the possibility to add location, behavioral, and demographic information (the latter often requires user opt in). Frequency of use, reach and usage context are the important factors when inserting ads into applications. However, MADS founder Ashu Mathura contends that current targeting software still only does about 25% of what is needed.

MADs did a H&M campaign in which ads were served to two groups of users: all users, and those who had already clicked on a H&M ad. Unsurprising, the campaign has a much higher response in the second user group. Based on this insight, it might make sense to create a sequence of ads as part of a campaign, where a second ad in the sequence is only served to users who have clicked through the first. I could certainly see myself being interested in ads that remind me when the H&M sale starts and offers a voucher if I make it to the second or third ad. MADS also sees potential in the idea of users opting in for certain types of ads in return for rewards like discounts.

Interesting developments on the technology side include interactive video advertising (introduced last year by Admob) and making greater use of smartphone features such as the accelerometer and camera, such as for augmented reality ads.

Most players see Google’s Admob acquisition as an endorsement of the mobile ad market in general. InMobi, which is the only ad network to reach profitability other than Admob, thinks that the industry is at the 1.0 stage. According to Anne Frisbee (Head of North America at InMobi), the acquisition has actually occurred “quite early in the evolution of the industry”.

Jasper de Vreught from MADS says that in the future “there will be a clearer division between two business models: the “long tail model” like AdWords and AdMob, and the “premium model” like Doubleclick and MADS, which are aiming to build a network of premium publishers and attract premium advertisers. MADS’ Mathura also says that while there is a lot of focus on downloaded apps right now, most of this functionality is likely to move into the cloud, and there’ll be a corresponding impact on how advertising is done.

According to eBuddy, the media agencies have still not really embraced mobile and tend to stick to the old and proven formula. Rueb says “It’s important for eBuddy to get the premium advertisers on board. There are too many VAS (value-added services) advertisers like ring tones right now.” Other players say similar things. Advertisers still like to see things like TV spots, which they understand, even though this is often not rational in terms of return on investment. Maybe 2010 will be the year when advertisers start seeing mobile less as an experiment and more as a serious part of their campaigns.