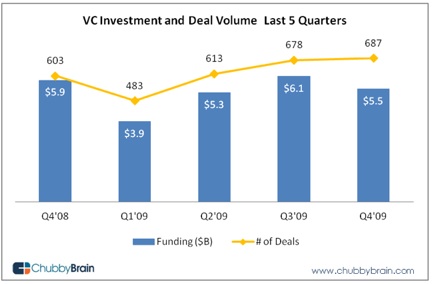 The end of 2009 brought a flurry of activity from venture capitalists hard at work closing funding rounds, according to a report released today by information services company ChubbyBrain.

Early-stage investments were in vogue as cautiously optimistic investors increasingly closed deals with startups looking for their initial venture rounds, the report says. While startups raised less money this quarter than in Q3, the number of funding rounds increased as venture capitalists bet hard on internet startups to make it big in 2010.

The report tracked venture led funding rounds in Q4 2009. Total venture funding dropped to $5.5 billion in Q4, down from $6.1 billion in the previous quarter. While total funding dropped, deal volume is a more appropriate indicator of the funding climate, as Q3 numbers were aided by a handful of large later-stage deals closed in the quarter like Solyndra’s $220 million, Twitter’s $100 million and Tesla’s $83 million rounds.

687 deals closed in Q4, the highest total of the last five quarters. Early stage investment was a strong driver of deal activity in Q4, accounting for 21% of funding and 37% of the deals, up from 13% of funding and 29% of deals in Q3. The rise in early-stage deals could signal a renewed optimism amongst venture investors as they increasingly dedicate capital to riskier ventures.

While investors were less risk averse, they were looking to deploy their capital in less capital-intensive sectors. Even as the healthcare sector maintained its rank in Q4 as the largest recipient of venture funding, deal volume in the sector dropped from Q3 as total funding remained flat. The shift to investing in capital-efficient startups particularly hurt cleantech, as funding dropped 38% from Q3 levels as deal volume remained the same. Internet sector investments surged ahead of cleantech to take the number two spot, with internet companies raising nearly $1.5 billion in Q4, an increase of 40% from Q3. 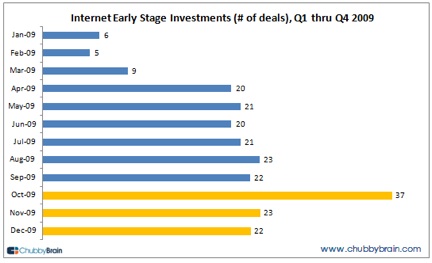 Venture capitalists were attracted to smaller deal sizes as they invested in 227 internet companies in Q4, the most of any sector. The median internet deal was $3.4 million, in comparison to $6.2 million in healthcare and $6.5 million in cleantech. Early stage investors were especially active, with early stage deals accounting for 49% of deals and 23% of funding in the sector during the quarter. Internet companies are often less capital intensive and easier to scale, leading to smaller initial funding rounds while investors diversify their portfolios over a larger number of companies.

Despite maintaining its fundraising supremacy, drastically reduced activity in California’s healthcare and cleantech sectors caused total venture funding in the state to drop 21% during Q4. The report noted both New York and Massachusetts had strong early-stage funding growth, a factor that led to an increase in overall fundraising levels in both states. Massachusetts came in second in fundraising, with healthcare leading the way and accounting for more than 50% of funds raised. New York was third, growing 26% over Q3 on the strength of increased internet investing. Texas and New Jersey were fourth and fifth respectively. 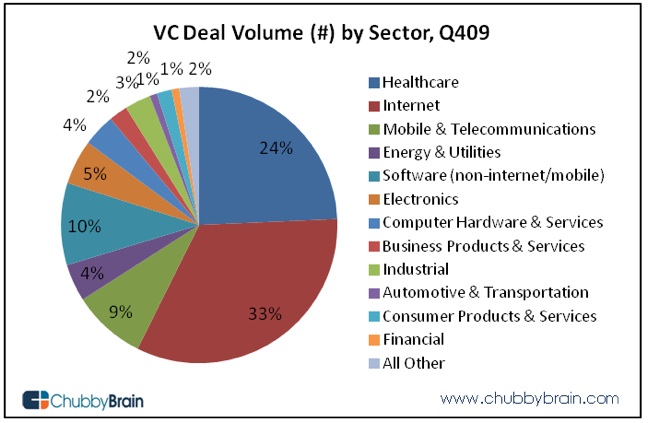 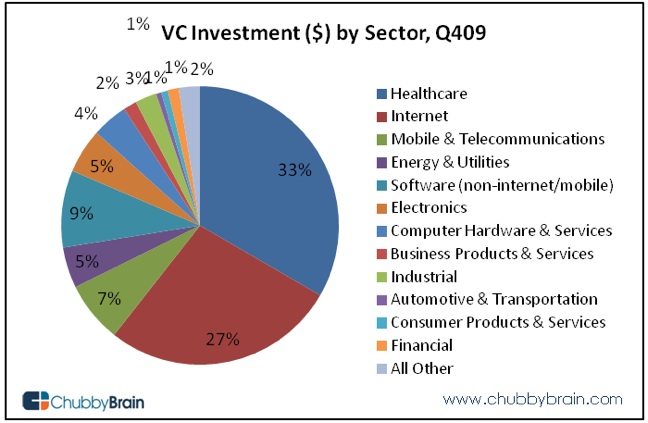