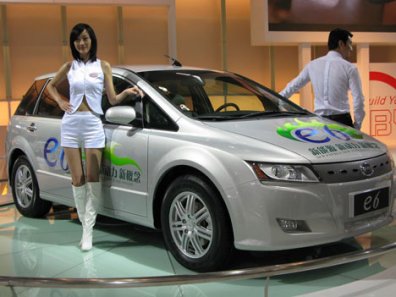 BYD is planning to bring Chinese-built electric cars to the U.S. market by the third quarter of this year, the company has announced. The one-time maker of batteries for mobile phones, now sells gas-powered cars in South Africa, South America and in China. While the plug-in model it plans to release in the U.S. will lack the polish of Toyota and Nissan’s impending offerings, BYD says its battery life will be double that of its competition.

Short for Build Your Dreams, BYD started out with just $300,000 and a goal: to compete with Japanese battery imports. Founder Wang Chuan-Fu began by taking apart Sanyo’s batteries to see how they were made. Just give years after it was founded, the Chinese company became the largest cell phone battery supplier in the world. Today, you’ll find its batteries in your iPhone. It also makes them for most of the Motorola Razrs produced today. So when it says its mission is to become a major auto vendor, it doesn’t seem like such a long-shot.

Currently, the company is working to get its e6 model vehicle into government and taxi fleets — a very similar strategy to that being pursued by Th!nk North America. It’s a popular way to introduce innovative auto technology into a market — one that Toyota also hopes to use to promote rapid adoption of its hydrogen fuel-cell models by 2013.

BYD plans to start small in the U.S. and gauge risk and market response before shipping more. A large part of the e6’s success in America will depend on the company’s proprietary lithium-ion ferrous phosphate batteries.

In China, BYD sells the F3DM plug-in hybrid. That vehicle travels 62 miles on a single charge before the regular generator is needed — 50 percent farther than the Chevy Volt is anticipated to go. The vehicle sells for $22,000 in its home country.

With the e6, BYD is producing a five-passenger crossover that it claims can travel more thsn 200 miles on a single charge. While it has yet to meet U.S. safety standards, Chuan-Fu is confident that he will get the e6 to market before the end of the year. If so, Toyota, General Motors and Nissan may have tougher competition in the EV space than they expected.