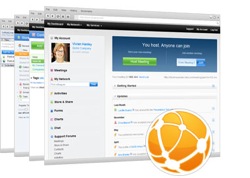 Here comes another blow against skeptics who question whether large, enterprise-scale companies will ever use web-based (or, to use the more trendy term, cloud-based) applications: Consumer electronics maker Panasonic just announced that it’s switching over from Microsoft Exchange and other on-premise technology to IBM’s LotusLive suite of online collaboration software.

That’s about 100,000 people migrating to LotusLive initially, and IBM says the number could reach as high as 300,000. The company is describing this as “the largest enterprise cloud deployment in history,” and while it’s hard to make that statement definitively, it’s certainly up there. For example, one of Google’s big wins for its Google Apps bundle of online business software was Genentech, which has around 11,000 employees.

The move comes as Panasonic says it wants to bring together its various brands and companies into a more unified global organization. Sean Poulley, Vice President of IBM Cloud Collaboration, said Panasonic’s decision to switch to web apps stems from that goal, while Panasonic choice of IBM over competitors like Microsoft or Google came down to IBM’s inter-company collaboration capabilities, and to trust.

“We were designed from the get-go not just for collaboration inside of a company, but between companies,” Pouley said.

This deal is particularly impressive for a company that isn’t as closely associated with cloud computing as Google. And we’re talking about service that only launched last year, and only added email last fall. IBM says LotusLive now has a total of 18 million users. (Back in October, Google said Google Apps has 20 million.)