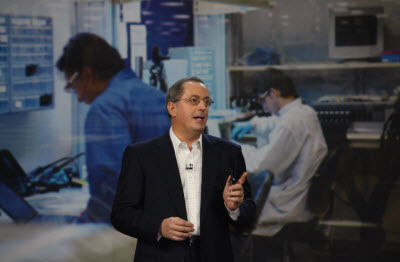 Intel chief executive Paul Otellini said that consumer spending led to a turnaround in computer purchases in the fourth quarter. That, in turn, led to one of Intel’s most profitable quarters ever.

Otellini said server chip sales were strong thanks to a product refresh cycle. Intel launched its Nehalem-based server chips in the spring and stayed ahead of rival Advanced Micro Devices, launching multiple products that made server customers spend more on average. That spending continued in the fourth quarter.

“We are entering 2010 in a very strong position,” Otellini said in a conference call with analysts.

Intel started moving from 45-nanometer manufacturing to 32-nanometer for consumer chips in the past few months; when it makes such a change, Intel can introduce faster, cheaper, and lower-cost products. On that front, it is well ahead of its rival Advanced Micro Devices. As customers create more power-efficient data centers and demand shifts toward cloud-based services, Intel’s server products are benefiting.

On the low-end consumer side, Otellini said Atom chips are selling well. The Atom chips are low-power devices that power netbooks, which are smaller than laptops and are meant for web surfing. The new Pinetrail-based Atom chips appeared in 80 different netbook designs. There are 600 Atom-based design wins, 2,000 design plans, across 230 different customers in the embedded space, where Atom processors power non-PC devices. Some 93 of the 230 are brand new customers for Intel.

At the Consumer Electronics Show, Intel and its partners showed off a lot of consumer electronics devices with Atom chips, including the new LG smartphone based on Intel’s upcoming Morristown Atom platform. Otellini said that Atom is thus getting into handheld devices, and there will be more announced on that later.

Otellini said that the supply chain isn’t bloated and is operating efficiently. Intel saw stronger sell-through and lower inventory levels compared to a year ago. Overall inventory rose because of the transition to 32-nanometer products. Capital spending was $4.5 billion, down from the original forecast of $5.2 billion and less than the annual depreciation amount. Intel credited efficient production for the lower spending. At $440,000, revenue per employee in 2009 was the third highest in Intel’s history.

Otellini said that 2009 was an unusual year in that “the lights went off” for the first half of the year and sales recovered strongly in the second half. Stacy Smith, chief financial officer, said that the market bottomed in the first quarter. Microsoft’s launch of Windows 7 gave the company strong sales in the fall.