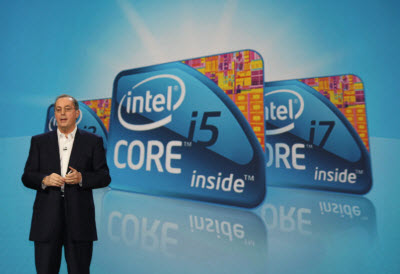 Intel gave tech investors a present today as it announced revenues and earnings that beat expectations. The report has broader implications for the larger technology market, since Intel is the world’s biggest chip maker and is a bellwether for the computer industry.

Intel chief executive Paul Otellini said in a statement that the results reflect Intel’s investments in manufacturing and product innovation. Indeed, the chip maker continued to invest in factories and new manufacturing processes even during the difficult economic times.

The news should be welcomed on Wall Street. Last week, at the Consumer Electronics Show, Intel introduced 25 new microprocessors, including many based on its 32-nanometer manufacturing process. The only cloud on the horizon remains its antitrust troubles; the Federal Trade Commission, among others, has launched an antitrust case against Intel.

Intel closed the quarter with 79,800 employees, down from 83,900 a year ago. In a statement, Intel chief financial officer Stacy Smith said that consumer demand and inventory have returned to normal levels, after huge drops a year ago and in the first quarter of 2009. Average prices for microprocessors were up in the quarter, and the overall financial performance was one of the best quarters ever in terms of profits. Sales in all territories grew.

Sales of Intel’s Atom processors, which are used in netbooks (smaller than laptops, meant for web surfing), were up 6 percent from the third quarter.