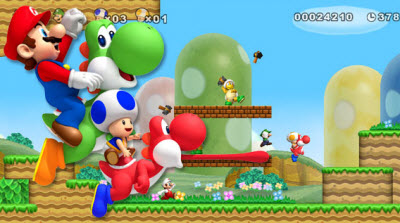 Sales rose a scant 4 percent for the overall industry in December, but that wasn’t enough to make up for eight months during the year when sales were below 2008 levels, according to market researcher NPD.

But, of course, NPD doesn’t measure the size of the growing part of the industry: online multiplayer games on web sites, Facebook and other social network games, and iPhone/iPod Touch games. All of those sectors are healthy.

Total software sales for PC, console and handheld games were $10.5 billion, down 11 percent from $11.7 billion a year earlier.

“Clearly, 2009 was tough year for consumers and the national economy,” said Michael Gallagher, chief executive of the Entertainment Software Association. “However, the bigger picture is one that underscores the industry’s strength; 2009 and 2008 were the highest grossing years in our industry’s history. That said, our industry’s structure is solid, and I anticipate a strong 2010 with a pipeline full of highly-anticipated titles.”

Portable hardware sales saw a 6 percent increase in 2009, but the overall console hardware sales fell 13 percent in 2009. Console and portable software fell 10 percent, while video game accessories fell 1 percent. No matter how you slice it, it was a weak year. But the industry can look back a decade to 2000, when the whole industry was just $7.9 billion in sales.

For the calendar year, Sony said its sales grew 22 percent to 4.3 million, up from 3.5 million in 2008. Sony said that December set records for both PS 3 hardware and software sales in the U.S. The PlayStation Portable saw an increase of 122 percent from November to December. Patrick Seybold, spokesman for Sony’s U.S. game division, said that 2009 was a turning point for the PS 3, with a big response to games such as Uncharted 2: Among Thieves, which has an average review score of 97 on Metacritic, which aggregates review scores, and which I named the best game of the year. Uncharted 2 sold more than a million units in North America.

In December, Nintendo and Activision Blizzard fared well for game sales. Nintendo had the top games with the New Super Mario Bros. for the Wii, Wii Fit Plus, and Wii Sports Resort taking the top three titles. Then Activision Blizzard’s Call of Duty: Modern Warfare 2 took the fourth position (Xbox 360) and fifth positions (PS 3) on the chart of the top ten selling games of December. Electronic Arts had only one title in the top ten: Left 4 Dead 2, at No. 9.

Sony’s big launches coming this year include MAG, God of War III, and Heavy Rain. The company is also launching a new motion-sensing controller this spring, and it is pushing 3-D glasses-based gaming as well with its newest TVs.

Microsoft also added its own figures to the NPD numbers. It disclosed earlier it had sold 39 million Xbox 360 consoles to date since 2005, including 10 million worldwide during 2009. This year, it sold $4.8 billion worth of Xbox 360 software, hardware and accessories. Gamers bought $2.7 billion worth of software in 2009, contributing to 8.8 games sold per console to date. Xbox Live reached a peak of 2.2 million users on at the same time.

Nintendo said the 3.8 million Wiis sold in the U.S. in December was an all-time high on a monthly basis. The DS and DSi sales of 3.3 million amounted to its second-highest monthly sales ever. The DS sold 11.2 million units in 2009 in the U.S., while the Wii sold 9.6 million in the U.S. this year. The price cut at the end of September looks like it really sparked demand. U.S. lifetime Wii sales are now at 27.2 million units, and the DS is at 38.8 million units. Nintendo had six games in the top ten list in December. Nintendo said it sold 2.8 million copies of New Super Mario Bros., 1.7 million copies of Wii Sports Resort, and 1.7 million units of the Wii Fit Plus game. For the year, Nintendo had seven of the top ten best-selling games.

Be sure to check out our latest announcements on GamesBeat@GDC, our video game conference taking place March 10 in San Francisco. Electronic Arts John Schappert will give a fireside chat, and OnLive’s Steve Perlman will give a keynote speech.