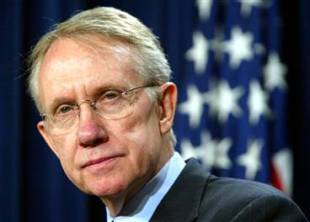 Emerging from a media firestorm over racially-charged comments he made during the Obama campaign, Senator Harry Reid (D-Nev.), the Senate majority leader, has turned the spotlight back onto passing an effective climate bill. The move comes after nearly a month of post-Copenhagen malaise.

The failure to produce a global agreement to reduce greenhouse gas emissions seems to have left Congress deflated. On top of that, health care reform still isn’t in the bag, and passing any legislation that could potentially hurt local economies is even less popular in 2010, an election year.

That’s one of the biggest arguments against setting targets for slashing emissions (or capping carbon) — that it will hurt employment and growth in states dependent on fossil fuels and traditional power plants. Just look at Max Baucus (D-Mont.). A moderate Democrat, he still shied away from throwing his weight behind drafts of a climate bill because Montana is a major coal producer.

Even though it has these odds against it, the climate bill may still come to a vote on the Senate floor this spring, at least if Reid has anything to say about it. He’s certain not only that it will make it onto the agenda before the summer, but that it will pass after winning broader bipartisan support. Already, Senator Lindsey Graham (R-S.C.) has been outspoken about the need for emissions reductions.

Strong words from Reid, delivered to geothermal energy supporters in New York, were partially motivated by a new amendment introduced to another bill by Senator Lisa Murkowski (D-Alaska) that would block the Environmental Protection Agency from enforcing any limits on greenhouse gas emissions. In December, during the U.N. climate talks in Denmark, the EPA announced that it had declared emissions a danger to human health, placing them under the jurisdiction of the executive branch. The Murkowski amendment seeks to wrest away this new power.

But Reid isn’t being purely altruistic in his endorsement of a climate bill. He wasn’t speaking in front of a geothermal crowd for nothing. He told the audience that he hopes to include tax credits and federal funds for research for geothermal projects in whatever climate bill finally comes to a vote. His home state, Nevada, is prime territory for geothermal development, which could boost the state’s economy and employment rates.