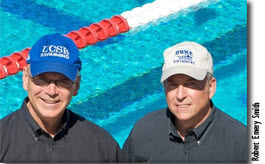 Byron Reeves and J. Leighton Read are co-authors of Total Engagement:  Using Games and Virtual Worlds to Change the Way People Work and Businesses Compete, published by Harvard Business Press in 2009.  They wrote this piece about extending our previous VentureBeat stories on funware (the use of game-like ideas in non-game applications) even further into the enterprise.

If you take a close look at what’s going on in multiplayer online games like World of Warcraft — as we have — you will find that people are carrying out tasks that look very much like the kinds of problem solving, classification, collaboration, leadership and followership that are the meat and potatoes of today’s everyday work.  Tens of millions of people pay companies like Blizzard Entertainment for the privilege of doing sophisticated work on computers.  Our tongue-in-cheek title isn’t meant to imply that people shouldn’t be paid for their time and talent, but to raise the question about why work is so poorly constructed today and what can be done about making it more fun.

It has to do with the context in which we ask people to be productive and the rewards and incentives scattered around these tasks.  Most work is not “designed,” but takes place in settings and flows that have evolved haphazardly as our economy has evolved from mostly jobs handling physical materials to mostly people using all kinds of tacit knowledge in information work.  What would happen if jobs and career paths were as carefully thought out as the level design and reward systems in a truly good video game?

These pages have featured several good discussions of funware:  games with purposes beyond entertainment.  Several have highlighted ways consumer product companies are experimenting with social game mechanics to get people to spend more time exposed to their “brand promise.”  At a recent conference, Mark Pincus of Zynga forecasted an avalanche of such games instantiating “the next business plan of the internet.”

The early players are making news.  We like Booyah’s delightful idea of using social game mechanics to reward personal achievement in life. Lithium Technologies has a leaderboard that recognizes levels of achievement among customers who post responses to on community websites. Bunchball allows websites to overlay group challenges, point systems, synthetic currency exchanges that all increase site stickiness.  And in the Fortune 500, IBM is experiencing widely with serious games, including simulations like Innov8 that allows IT professionals to compete on a global scoreboard to solve productivity problems.  Business Week has just profiled McKinsey’s use of video games to test recruits for leadership potential and to assess team-building styles, and Philips’ and Johnson & Johnson’s use multiplayer games to improve collaboration between far-flung groups.  At Microsoft, Ross Smith has been using games to promote above-and-beyond collaboration for years and the most recent project uses leaderboards and feedback in a game context where hundreds of multilingual colleagues volunteered – in a game – to help improve the pages of Windows 7 documentation seen around the globe.  And there is a lot to learn from Target’s game-like point of sale scoring for checkers. 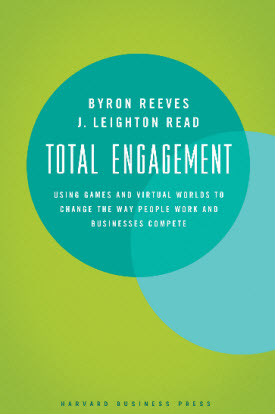 We are especially interested in how the software used in enterprises will increasingly define and support new kinds of jobs in workplaces where “play” is not a dirty word.  We go out on a limb and argue that games and game-like features are the future of work, or at least information work wherever mediated by computers, and we forecast dramatic upsides and downsides of these developments in our new book, just out from Harvard Business Press.

A couple of years ago, HBR published our findings on leadership in multiplayer online games.  That is just the tip of the iceberg when you consider the many ideas from great games that can help reshape the world of work.  During epic raids on computer-generated monsters and continuously in between, exquisitely orchestrated collaboration is taking place in MMOs across time zones and cultures.  This “work” is mediated by affordances that are much cheaper than high-resolution video conferencing and often more engaging.  Great games also offer a wealth of ideas for promoting autonomy, enabling mastery and delivering a compelling sense of purpose —  three of the core intrinsic motivators described in Dan Pink’s popular TED talk.

While people sometimes tell us that their boss wouldn’t approve of fun in the workplace, such latter-day Puritanism is directly contradicted by a huge body of literature arguing that the serious and the playful are hopelessly intertwined in human performance.  Play is capable of energizing behavior of all sorts.  Play is a substantial force in how people think, feel and learn, and in how groups collaborate, share identity and produce culture.  New research shows that being engaged and emotionally involved can positively influence productivity at work.  Positive emotions facilitate creativity and the likelihood that people will help each other.  Emotionally involved workers are more likely to be evaluated positively by bosses as well as co-workers.  All of this is closely related to the concept of “flow,” the idea that our best moments – those we say we enjoy the most – occur when we’re voluntarily trying to accomplish something difficult.  This level of engagement describes a state in which nothing else matters, and experience is so pleasurable that people participate at great cost and for the mere sake of enjoyment.  This helps explain how games sustain motivation, and how enjoyment should be understood as a precursor to involvement at work.

We think it’s inevitable that serious play will invade the workplace because it is so powerful and that organizations that are early adopters will outcompete others.  What we have seen is that the places where this is happening the fastest are where gamers come out of the closet and start talking to colleagues about connecting the dots between play and work.