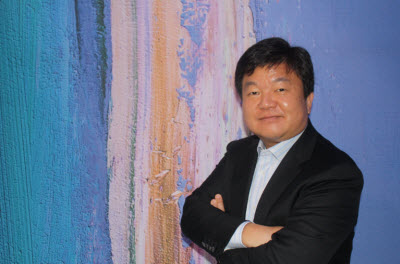 TVs have been dumb for a long time, but now they’re getting more advanced as they become portals to the Internet. Sharp’s newest TV, for instance, has the same Cell supercomputing brain that powers the PlayStation 3.

To date, computer chip maker Intel has had a lot of abortive attempts at launching consumer technology, rivals say. But at the Consumer Electronics Show, the company launched a series of chips and initiatives aimed at moving deeper into the consumer electronics realm, using everything from wireless technology to custom chips for set-top boxes.

We caught up with Eric Kim, general manager of the digital home group at Intel, at the CES Show to find out more about what the company has planned.

VentureBeat: What’s your message at the show here? 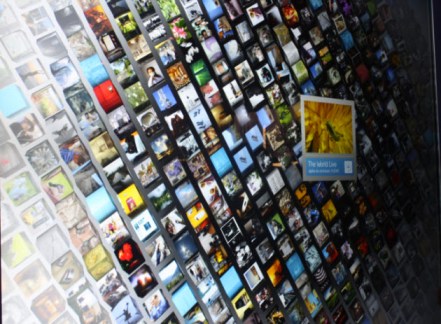 Eric Kim: We are driving fundamental innovation in the consumer electronics (CE) industry. The CE industry is what is in the house, like set-tops, TVs, DVD players and those things. We have had a singular focus on broadcast and linear playback. The usage model has always been linear playback. Now, the whole craze of 3-D today is extending that. That’s fine. What we are doing is driving a fundamental change in the usage, from linear playback to a fully interactive one. It is Internet and application usage. First, we delivered new silicon that could do full 3-D graphics and other high-definition and good quality audio. In December, 2009, we delivered our second generation chips. Those are half the size, have better performance and graphics. We are on an annual cadence. You can expect us to deliver another generation in 2010. 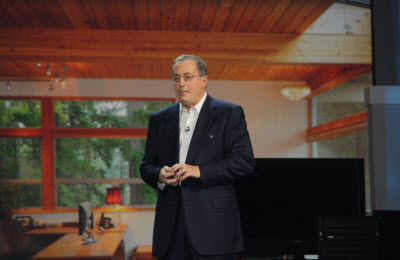 VB: There are entrenched competitors in this space. You’re trying to break in.
EK: Yes, the entrenched silicon providers are Broadcom, Sigma Designs, ST Micro, and NEC. For the most part, they use MIPS-based microprocessor architectures. Their focus has been to improve on the display side and reduce costs. We are changing the entire game. TVs will transform from a dumb device to a smart Internet computing device. I have silicon and software to deliver, and I think I have an advantage. The good thing is we are involved with a number of major manufacturers, service providers, and application developers that are all developing breakthrough products in this space.

VB: What have you shown here?
EK: Orange group from France showed off their next-generation set-top box with a new interface. That is one example. There are many other innovations that our partners are not yet disclosing. 2010 will be an exciting year.

VB: What expectations do you have about this consumer electronics business for Intel? Intel has tried this before and it hasn’t worked.
EK: All of these in-home devices are 500 million units sold per year. So far, these have not connected to the Internet. In a five year horizon, all of them will connect to the Internet or the home network. We are the first ones to really drive this. We have a market advantage and have a chance to achieve market leadership.

VB: Will Google’s Android operating system take off in this space?
EK: That’s very possible. So far Android has focused on mobile. There is nothing that will prevent Android from targeting the consumer electronics space. Android’s usage model is to deliver a great application foundation. It has a purpose-built, user interface environment that makes sense for the consumer electronics space. 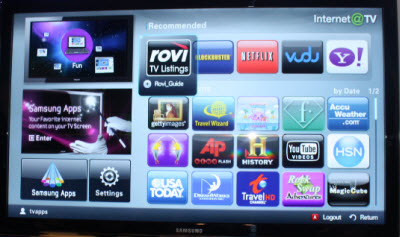 VB: Intel has created the AppUpStore to try to jumpstart this space on the software side?
EK: Yes. We announced that we will deliver an app store that enables our customers to host their own app stores under their own brands, if that is what they want to do. Google has its own app store. Today, we are targeting netbooks with our app store so it makes sense to focus on netbooks right now. As TVs and set-top boxes and Blu-ray players get connected, it makes sense to target them with apps as well. It doesn’t matter what kind of device it is.

VB: We’ve noticed there is a free-for-all here. Manufacturers are becoming retailers by opening app stores. And retailers like Best Buy, which has its own internal Rocketfish brand, is becoming a manufacturer. What does this mean?
EK: Our strategy is not to put Intel’s brand into an app store. We will be a white label supplier.

VB: Does 3-D viewable TV change the silicon requirements for a TV?
EK: It requires more computing power and we think that plays into our favor. 3-D represents a continuation of a linear playback paradigm. We will be at the leading edge of that. But we think that true interactivity from apps will be the new paradigm. 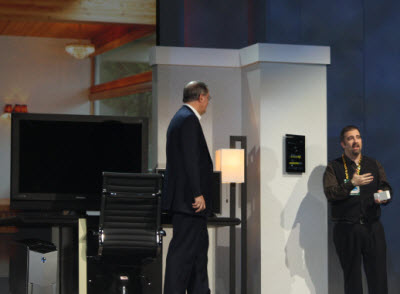 VB: Is  home energy management falling into your group too?
EK: It’s everywhere. We are all running hard on energy management. As the home gets networked and the TV becomes the primary display screen, it becomes a natural interface to handle home management, which includes how you are spending the energy in your home. You can make your lifestyle choices more easily.

VB: Do you put Intel’s brand on those home energy management things?
EK: Intel is an ingredient company. We don’t make our own end-user products. We have a strong brand that delivers trust and quality.

VB: It seems like you might supply things to the smart meter companies, or will you compete with them?
EK: We are an ingredient company that supplies the chips in that space.

VB: The Intel Wireless Display looks very interesting. It bypasses some of the other home connectivity boxes.
EK: It goes straight from the TV to a dongle that connects to the TV. It thus connects video on your computer so it can be played on the TV. The dongle will go away in the future, so the computer connects wirelessly directly to the TV.

VB: Do you agree that 3-D is the big trend of the show?
EK: 3-D is the next thing for the industry. Hollywood is putting a lot of effort into it. With Avatar, it is clearly a hit in the theater. I think the jury is still out as to how big a consumer home phenomenon it will be. It’s a major thrust for consumer electronics makers, and we are embracing it too. We are providing the performance to make it happen.

VB: Was 3-D always going to be a big part of your plans, or was it a result of the movie doing well?
EK: It has been evident from 2009. So it was always a big part of our plans. To enjoy it at home, you will need a new TV, a new set-top box, and a new Blu-ray player. Customers just went through a big adoption of the high-definition flat-panel TV over the past seven years. Now you just got one. Will you now replace that with a 3-D TV? I don’t know. Everything happens faster now. The typical life-cycle for a TV used to be 10 years. Now it is seven years. 3-D TV may push that so it becomes shorter. It’s a good thing for the industry.