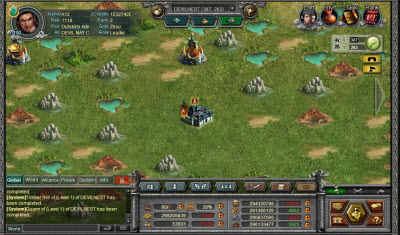 Will Western gamers play Asian online games? That’s a big question in the video game market these days. Jagex will test the idea today as it launches War of Legends, an English language version of a Chinese online historical military conquest game.

Jagex, which is the largest independent game company in the United Kingdom, will publish War of Legends, which was developed by a Chinese developer and launched successfully as World of Feng Sheng in China. Now Jagex is trying out the game, as well as a new business model, on Western gamers.

The new game is free for players to start playing. But if they wish, they can spend real money buying virtual goods inside the game. With Runescape, the major online game operated by Jagex, there is a different model. In Runescape, players can play for free in certain regions of the game. But if they want to get access to the full territories of the game or get access to advanced features, they have to pay $5.95 for a monthly subscription.

Jagex has other free-to-play games among its 40 or so internally-produced titles. With War of Legends, Jagex will finally embrace a game made by a third party.

In War of Legends, players fight each other in “real time,” meaning they make their moves simultaneously as they control big armies. They can control an empire, make alliances with other players, and either fight or ally with a mythical Chinese king. Players have to build and defend cities. A player’s armies can grow even while the player is offline. The storyline constantly evolves and the game will have regular updates to keep players engaged. The Flash-based game can be played in a browser without a download.

Cambridge, Mass.-based Jagex was founded in 1999 and has 400 employees. Runescape competes with massively multiplayer online games such as World of Warcraft, Maplestory and Anarchy Online. Runescape has more than a million paying subscribers and has 6 million players overall.

Online players are expected to spend $1.6 billion on virtual goods in 2010 in the U.S., compared to $1 billion in 2009, according to Inside Network.