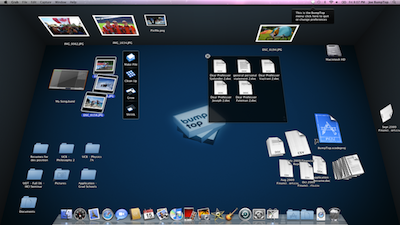 Look at your computer desktop. Everything’s clean, rigid, in nice neat rows and columns. Now look at your desk (or at least mine): piles everywhere, mess galore, and yet, somehow, it works much better than the computer version.

BumpTop thinks it can bridge that gap, making your desktop behave more like your desk. An application that launched initially in April of 2009, BumpTop is launching a Mac version today. There’s been a Windows version since April, and the company released a multi-touch version for Windows 7 in October that’s getting a lot of buzz. But today’s Mac version has a lot to love.

For a lot of computer users, the desktop becomes the default place for things—anything that doesn’t have an obvious home just lives on the desktop. Files get organized by name or by size, which isn’t nearly as useful to me as whatever insane system the mountains on my desk have. BumpTop changes that, letting me work with my virtual files just like I’d work with my physical ones.

All the elements of your desk’s workflow are there with BumpTop. You can create and organize sticky notes just like regular Post-its; make piles out of your things instead of putting them in folders, and flip through them easily just by scrolling your mouse. One click opens what you’re looking for, or breaks apart the pile to make searching easier.

The environment is totally 3D, so you’ve even got walls to pin things to if you’re so inclined. There’s no restriction to how you organize—BumpTop lets you drag and drop to your heart’s content, piling and re-piling, organizing and reorganizing. For the cubicle-conditioned, try clicking on one of the walls: BumpTop zooms in on that wall, putting your desktop in its own virtual cube.

For the not-so-neat among us, finding your files is also a whole lot easier with BumpTop. When you’re on your desktop, just start typing what you’re looking for, and anything what that term in it will be highlighted on your desktop. Files you use more often grow bigger on the desktop, making the things you use most frequently easier to find. Arguably my favorite thing about BumpTop, and the feature that makes it so exciting for touchscreen users, is the widget support. Drag a file or icon to a particular widget, and quickly and easily share it on Twitter, upload it to Facebook, email it to a friend, instantly copy it to a USB key, and more.

Today’s new version brings a bunch of cool new features to BumpTop, just for Mac users. If your computer has a multi-touch supported mouse or touchpad, pinching and dragging will make an icon smaller or larger—big icons are hard to miss and easy to remember, small ones easy to ignore. It works seamlessly with Spaces, Expose and Quick Look as well, so none of the things you love about the Mac desktop are going away.

It’s a graphics-heavy program, and I found that after filling my desktop to the rafters to test BumpTop, it started to run a little slow. But, for most people who aren’t intentionally overloading their desktops with files, it should work fine—it even requires less power than Windows’ own Flip 3D feature.

Whether or not BumpTop is really useful or just eye candy remains to be seen—you really need to use it for a while to get used to the workflow, even if it is a more intuitive one. Whether or not this is the solution I can’t say, but it’s a vast improvement over the stodgy, option-less way most of us interact with our desktops. Most of the major improvements (like piles instead of folders) are subtle, but make a difference in how you organize yourself and your computer.

The basic version of BumpTop, for both Mac and Windows, is free. To access all of the features, there’s a $29/year Pro service. As a gift to VentureBeat readers, though, we’ve got 100 to give away! The BumpTop Pro version is a free upgrade to the first 100 people to sign up at this special VentureBeat page.