Myfab, which sells furniture on-demand online, will be launching a US version of its site on February 1. The site already exists in France, where it was first launched in April 2008, Germany, Belgium, and Luxembourg. The US site will initially offer shipping only to California, with the 48 contiguous states added in the 4-6 weeks after the soft launch. In anticipation of the launch, the Shanghai, China company opened a US office in San Francisco in November.

Myfab sources high end furniture directly from the factories in China that supply furniture to high-end European retailers. The site allows users to vote on designs and will produce the most popular ones on demand, eliminating inventory, transportation, showroom, and catalog costs, resulting in Myfab’s prices being 50 to 80% lower than comparable retail prices. 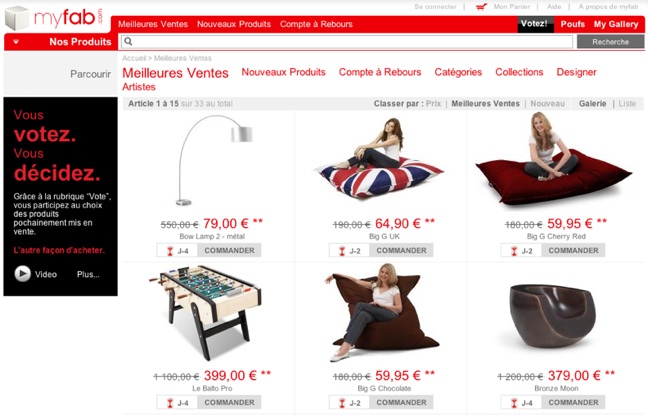 Myfab’s process is somewhat automated, but it is focused on what’s in demand, said CEO Kara Parsons. The company’s design team in Shanghai is focused on keeping up to date on furniture trends, including styles, textures, and colors, and communicating those to the factories. The company inspects all items before they ship.

The designs are presented on Myfab’s website, where users can vote for their favorites, and the most popular items will be offered for sale, typically for 7 days, although it may be longer for a more popular item, said Parsons. If demand for an item is particularly strong, it may even be put back on the site in conjunction with a second production run.

The consumer demographic is 25-45 year olds, with high income and education levels and a propensity to shop not only on furniture and design sites but to shop online, said Parsons, and she expects the US demographic to be similar.

Myfab was created by Stéphane Setbon and 3 co-founders in 2007, who had previous experience taking high growth rate companies public for Rothschild Bank in Paris. The site has since acquired over a million unique visitors. The company has 120 employees. Parsons, who spent 8 of her 17 years at Macy’s in their online division, most recently as VP of Marketing and Site Merchandise for macys.com, joined Myfab in November of last year. There is also a VP of Logistics based out of Los Angeles, as Myfab’s first port will be the Port of Los Angeles.

While the voting model is unique to MyFab, companies such as SmartFurniture, Amazon, and eBay sell furniture online. “Anyone who owns a piece of the online furniture marketplace” is a competitor, according to Parsons. The combination of voting, purchasing direct from the manufacturer, and ordering from an online, on-demand environment is unique to Myfab.

Myfab plans to open in additional, unspecified markets this year, with an eye on the global marketplace and to become the “Zappos of the furniture market,” said Parsons.