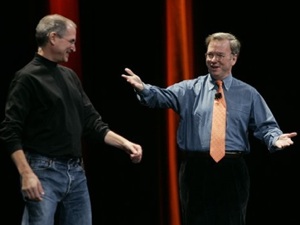 During the conference call discussing Google’s earnings, chief executive Eric Schmidt covered topics including Google’s priorities and its moves in China. Near the end of the call, he touched on one more topic that’s particularly interesting: Google’s relationship with Apple.

Apple and Google could have had a particularly fruitful relationship — imagine Jobs’ sleek hardware paired with Google’s comparative strengths in the cloud. But it was not meant to be.

The relationship turned sour quickly. Apple fudged on letting apps like Google Voice onto the iPhone and the search giant began putting some serious horsepower behind its homegrown mobile products like the Android operating system. Schmidt used to serve on Apple’s board of directors, but he left the board last August, as Android and the Chrome Operating System for netbooks were competing with Apple’s core business. Now that Google is selling the Nexus One phone directly, that competition has intensified. Apple is reportedly in talks with its historical rival Microsoft to replace Google with Bing as the default search engine on the iPhone.

Today, Schmidt praised Apple as “a very well-run company” (he’s pictured with Apple chief executive Steve Jobs above). He described Google’s relationship with Apple as a partnership in some areas with Google apps on the iPhone and a competition with in others like the Android versus iPhone horserace.

“I expect that to be stable for a while,” Schmidt said.