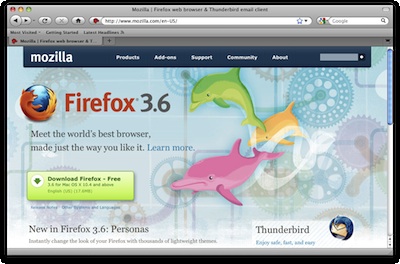 The latest version of Mozilla’s Firefox web browser, Firefox 3.6, is now available for download. While Mozilla isn’t exactly phrasing it this way, it sounds like the two issues that could drive me crazy about version 3.5 — namely, speed and stability — continue to improve.

On the speed side, 3.6 is supposed to be 20 percent faster on the SunSpider JavaScript benchmark. In regards to stability, Mozilla’s Director of Firefox Development Mike Beltzner told me that most of the browser’s crashes, as well as its security vulnerabilities, are caused by plugins or other third-party software. So Firefox 3.6 asks checks for out-of-date plugins and asks users to update them. And other changes to the way Firefox works with third-party software should also reduce crashes, Beltzner said.

Mozilla’s blog post highlights a few more new features for both users and web developers. Users can now customize the look of the browser with personas, which are similar to Firefox Themes but are even easier to add — you just click on the persona you want and the browser is gets a new look, without requiring you to restart. You can also watch video using the HTML5 format (which has an advantage over technology like Adobe’s Flash and Microsoft’s Silverlight because you don’t have to install a plugin) in full-screen mode. Developers, meanwhile, can now build web applications that allow users to upload files from their computers using a drag-and-drop interface. They can also build apps that detect the orientation of your computer.

One of the big goals, Beltzner said, is to get web applications to the point where they’re just as powerful as desktop applications. That’s an idea I hear a lot, but I was curious how close Beltzer thinks we are two that reality.

There are two areas where Beltzner acknowledged he wants to see improvement: Further integration of different device features such as multi-touch, and further integration of web applications into the operating system — so that, for example, I could double-click on photos in my hard drive and have them automatically open on a website like Flickr or Picasa.

“There are a bunch of specifications in HTML 5 which are moving us along that goal, but there are also a bunch of things whcih aren’t happening as quickly as we’d like,” he said. “We’re a little ways off from full parity.”