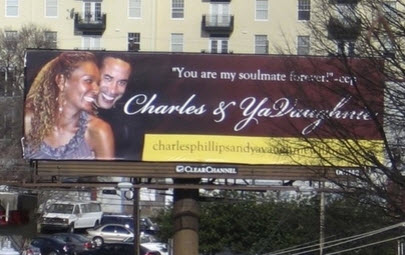 In the chronicles of Silicon Valley, it doesn’t get weirder than this. Just as the European Union finally gave its blessing to Oracle’s acquisition of Sun Microsystem’s, Oracle’s co-president found details of his 8.5-year extramarital affair splashed on billboards around the country.

Oracle executive Charles Phillips acknowledged that he had the affair with YaVaughnie Wilkins and that he began divorce proceedings with his wife, Karen Phillips, in 2008. But he says that his relationship with Wilkins has ended and “we both wish each other well.”

Wilkins apparently didn’t take the ending of the relationship very well, and reports suggest that Phillips was trying to make amends with his wife as the billboards featuring Phillips and Wilkins together began to appear. The business question here is whether or not this scandal could impair Phillips’ ability to do his job. There are different ways to look at that. Employees, customers and others might wonder about what kind of leader Phillips really is, and if he can be trusted. On the other hand, if this matter dies down, despite the highly public billboards, then it may blow over without much impact on the business.

The billboards have apparently appeared in New York, Atlanta and San Francisco, and they point people to a web site that details the romance between Wilkins and Phillips dating to 2001. Who said the database business was boring?