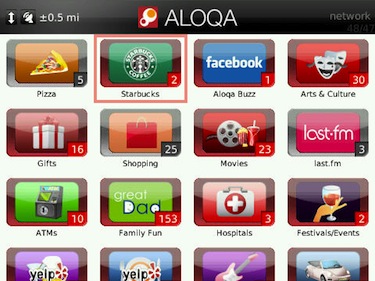 Aloqa, a mobile application that serves up local information to users based on their location, has released version 2.0 of its offering. The new version brings more local knowledge and social information to its nearly 300,000 users.

Aloqa, available for iPhone, Android, Blackberry, Windows Mobile, and Nokia and Sony Ericsson phones, is all about helping you discover the world around you—no matter where you are. Aloqa can find nearby stores, hospitals, movie showtimes and more, wherever you are. You can also see if any of your Facebook friends are nearby.

The app is always updating, so as you move around, you’re constantly kept updated with what’s going on around you, instead of having to search for what’s nearby.

With this new release, Aloqa adds three great new features. First, wherever you are in the US, you can look up the 25 closest houses and apartments for sale, and even make an appointment with a realtor. Aloqa will also show you major restaurant chains nearby offering take-out, which is great if you’re on a business trip looking for a quick pit stop. Lastly, there’s the “Hot” section, which will show you what people usually like or do when they’re in your location — whether it’s a great restaurant, or a cool store people love to check out. 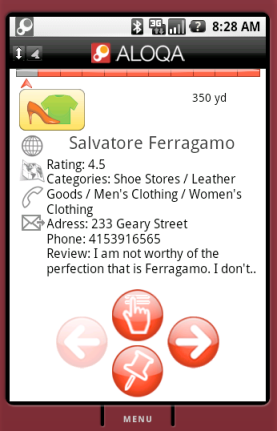 Aloqa is also making these features available to more users, now supporting use in five countries: the US, UK, Germany, Canada and Austria. There’s also lots of new content, places to go and things to do, most coming through Aloqa’s developer API and its partnerships with other companies.

One thing Aloqa has going for it is that it’s not totally reliant on its own users to publish content, which is an Achilles heel for a lot of location-based companies. By leveraging established tools like Yelp, Eventful, Facebook and others, Aloqa already has a ton of information it can tap, meaning it doesn’t have to get to a critical mass of users before it really becomes useful.

Though not without its fair share of competitors – Geodelic, Dopplr and Where are all making waves in the location-based information game – Aloqa is quickly making a name for itself. It was one of T-Mobile’s top picks for the Android Market and is currently a finalist for the Mobile Premier Awards. Of course, it was also the people’s choice winner at MobileBeat in July.

Aloqa has offices in Munich, Germany and Palo Alto, Calif. and in July raised $1.5 million in funding from Wellington Partners.