Two Soros executives have joined ExteNet’s board of directors. 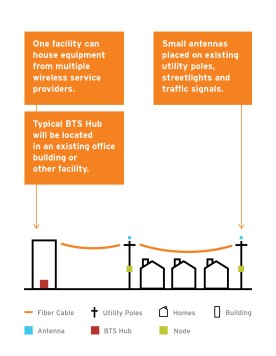 ExteNet makes distributed antenna systems (see illustration at right) that are used by wireless carriers to build out their backbone networks.

Instead of one big antenna — something most citizens will no longer allow to be installed in their neighborhoods — ExteNet uses a bunch of smaller antennas connected by fiber optics to a smart hub to route calls and data connections.

Chicago’s McCormick Place has two million square feet of floor space blanketed by an ExteNet distributed network, as the systems are called.

Other ExteNet installations include the Sunset Strip in Las Vegas, and the winding canyon of Highway 133 from Irvine to Laguna Beach. One antenna placed on every few utility poles will do the trick.

The company has a second technology called iDuct (below) that wires up the internal metal HVAC ducts in skyscrapers to serve as radio antennas that reach to the top of the building, rather than petering out at 75 feet as standard wireless antennas do. Chicago’s Trump Tower has all 92 stories wired via iDuct. 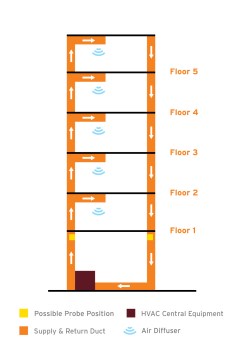 A previous round of $27.5 in May 2008 included Debt,Centennial Ventures, Columbia Capital, Sevin Rosen Funds, Palomar Ventures, and Centerpoint Ventures.