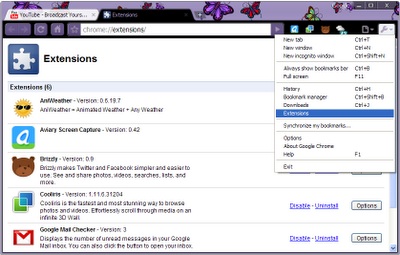 Even though Google’s web browser Chrome has been available for more than a year, it’s still adding important features that will help it match other browsers like Firefox. Today, Google announced the addition of extensions — programs that users install to bring additional functionality to their browser — for Chrome on Windows PCs

In the video outlining the announcement (embedded below), Google highlights a couple of extensions to illustrate the concept: Shareaholic for sharing webpages, Amazon.com for saving product wishlists, and Cooliris’ 3D wall. (Cooliris is getting plenty of endorsements from Google, lately, since it was also selected to develop the Gallery application for the Nexus One phone that Google built with HTC.) Extensions were previously available in beta testing mode, but now Google has taken the testing off, and there are more than 1,500 extensions available.

Google is also adding bookmark synchronizing to Chrome, so that if you use the browser on multiple computers, your bookmarks will be the same across those devices.

All of these changes only apply to Windows users. Google’s blog post urges Mac users to “hang tight” because the company is “working on bringing extensions, bookmark sync and more to the beta soon.” That’s frustrating, but not too surprising, since Google didn’t release a version of Chrome for Macs until last month.