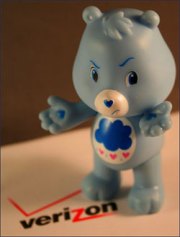 America’s largest wireless carrier, Verizon, announced that this year will be much like the last two in that it will once again cut 13,000 workers. Nearly all cuts will come from the company’s wireline workforce of 117,000, the Wall Street Journal reported after the company’s quarterly earnings call.

“The economy won’t help us as much as we thought,” Chairman and Chief Executive Ivan Seidenberg said on the call. He expects things won’t turn around until at least the end of the year.

[Image: Musings for a Darkened Room]