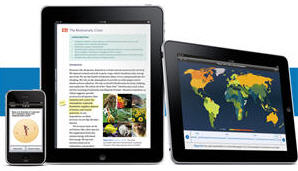 The ten-person San Francisco startup, stacked with pedigreed veterans of Microsoft and Google, Harvard, MIT and Stanford, came out of stealth mode after this morning’s iPad launch. Funded with about $1M in seed money led by Ram Shriram and Mitch Kapor, Inkling is working with McGraw-Hill, Pearson and other top textbook makers.

Textbooks are different animals than e-book novels and business books, in ways that current e-readers can’t handle. For starters, you don’t read a textbook’s pages serially from first to last. You need to be able to jump around, skip, skim, and flip back and forth between chapter review and chapter content. A textbook’s content should ideally be dynamic from year to year, not frozen in time like a novel. 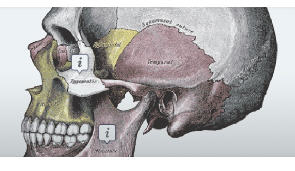 The iPad makes it possible to replace static images with interactive puzzles that MacInnis says burn important concepts in to students’ brains better and longer. He showed me a demo learning module that explained the biological concept of cellular mitosis. It starts with a real microscope image of a cell. A caption, simultaneously spoken by a voiceover (They call this karaoke mode. It turns out to help memory better than either text or speech by itself) instructs me to tap the cell’s nucleus three times to simulate its breakdown. Further steps in the mitosis process require me to pinch, drag or swipe components in the cell after identifying them. When I’m done, I have a memory of having walked through the process physically, rather than just scanning an illustration with my eyes.

Existing texts can be embellished with tooltips, talking text, and interactive quizzes.

Besides the interactive color format, Inkling’s technology goes beyond the Kindle and other readers by making it possible to hop around a book, to hand out individual chapters as assignments, and to take notes in highlighter yellow right on the text. The notes are sharable among a social network of students and instructor.

But the real breakthrough is in pricing. Instead of a $180 textbook, learning modules built with Inkling will be priced individually on iTunes, just as music and TV shows are. Instead of buying all 50 chapters of a 1,200-page biology book, an instructor can create a customized bundle of only the modules students will actually use. Pricing hasn’t been determined yet, but it’s likely to be a few dollars per unit — much cheaper than current textbooks. (Apple’s cut of book sales is said to be 30 percent.)

Technically, Inkling’s content format is a mix of HTML5, Cocoa and Javascript, depending on what content is being run on what platform. The iPad’s A4 chip is even faster than the Android G2 that gets geeks so excited, so rich layouts and interactive illustrations run quickly.

MacInnis says he half expected to be surprised at today’s Steve Jobs show by the unveiling of a competing technology. But for now Inkling is the only game outside the book publishers’ own much less advanced CourseSmart e-textbook format. “I think no one else did it because everyone else thought everyone else would be doing it,” he told me. “Nope, looks like it’s just us for now.”