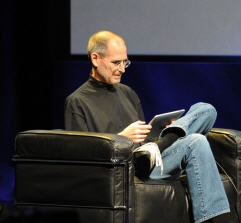 Apple’s Steve Jobs gave a demo a few minutes ago of the new Apple iPad, in which he portrayed it as an ultimate couch-surfing device. But will the device catch on among business travelers?

App makers are betting it will. A survey by app toolmaker Appcelerator found that app makers considered Apple’s pending tablet to be a much more business-focused device than the iPhone. They were more interested in building tablet productivity apps than tablet games.

Quinton Alsbury’s company MeLLmo makes the lovely Roambi data visualization app (pictured below), which replaces grid-based spreadsheet layouts with graphical widgets designed to look and feel best on an iPhone’s display. Alsbury says his company is already working on an iPad version that will use the iPad’s larger screen differently than it does the iPhone.

In an email, Alsbury said the iPad “is poised to change how mobile workers conduct business. It’s more mobile than a laptop, more powerful than a smartphone.” 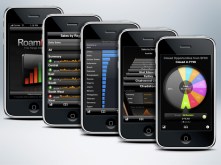 While the iPad can run iPhone apps just fine, Alsbury says the best apps will be those redesigned specifically for the iPad. “When we designed Roambi for the iPhone,” he said, “our motto was ‘don’t shrink, rethink’ – that is, rethink how to interact with information on a small screen. Similarly, as we optimize Roambi for the iPad, we’ll be rethinking how to leverage more screen real estate while still offering a better way to view, analyze and interact with critical business information on the go.”