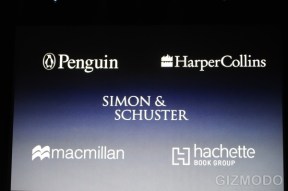 Updated with statement from McGraw-Hill.

This is one of Steve Jobs’ slides from this morning’s iPad launch presentation. Can you tell what’s wrong with it?

The awkward array of five logos used to be a tidy lineup of six. The day before the show, Apple removed McGraw-Hill, the 122-year-old publisher whose 61-year-old leader, Harold McGraw III — better known as Terry — prattled like a teenage schoolgirl about the tablet’s iPhone operating system on CNBC:

Yes, they’ll make their announcement tomorrow on this one. We have worked with Apple for quite a while. And the Tablet is going to be based on the iPhone operating system and so it will be transferable. So what you are going to be able to do now is we have a consortium of e-books. And we have 95% of all our materials that are in e-book format on that one. So now with the tablet you’re going to open up the higher education market, the professional market. The tablet is going to be just really terrific. 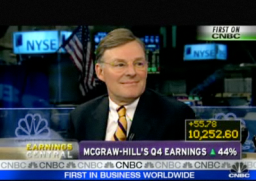 McGraw-Hill is bigger than most of the publishers on this slide. But insiders say as soon as Terry shot his mouth off on CNBC, Jobs had the company cut from the presentation. We won’t know for a few weeks if McGraw was only wrist-slapped, or if he’s been thrown out of the game.

Either way, it’s a concrete lesson in just how far removed the publishing industry can be from reality. In the past, music and movie fatcats were able to figure out the unwritten rule that McGraw so glibly overlooked: If you’re working with Apple, shut up about it until Steve has left the stage.

“As a company deeply involved in the digitization of education and business information, we were as interested as anyone in the launch of the new device, although we were never part of the launch event and never in a position to confirm details about the device ahead of time. On Tuesday afternoon Mr. McGraw appeared on CNBC in a wide ranging interview to discuss our earnings announcement and growth projections for 2010. His speculative comments about Apple’s pending launch, which he shared earlier in the day in a call with investors, were simply intended to suggest that if the new device were to use iPhone applications, many of our education products would be compatible with the technology and could be made easily available on it.

“Unfortunately, it seems that many mistakenly interpreted his comments as being more specific to yesterday’s announcement.”

“It is also important to note that only the products of trade publishers were featured in the launch event. Our digital education programs are not in that category and were never part of those negotiations.”

[top image via Gizmodo, of course]