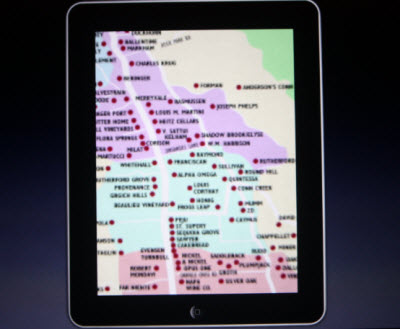 Apple’s Steve Jobs is on stage at the company’s big iPad launch event today, showing off the device. He’s sitting in a chair, tapping away at the device’s touchscreen, playing music, videos, viewing newspapers, and showing slide shows (see a brief video clip of his demo below).

He shows that you can access the iTunes store directly from the device, buy songs, discover music, and otherwise do everything you can do with iTunes from a computer.

The video playback on the device looks great, at least on the big screen. Jobs showed a scene from Pixar’s “Up” film. The crowd cheered wildly at the demo.

The device is 1.5-pounds and a half-inch thick. It has a 9.7-inch IPS screen full-capacitive multitouch. It’s powered by Apple’s 1 gigahertz Apple A4 microprocessor, designed by the company’s own PA Semi engineers. The storage is 16 to 64 gigabytes of flash memory. It has Bluetooth and 802.11 Wi-Fi and 3G. It has a battery life of 10 hours during use and a month of standby time. It is arsenic free.

“Watching it is nothing like getting one in your hands,” he said. 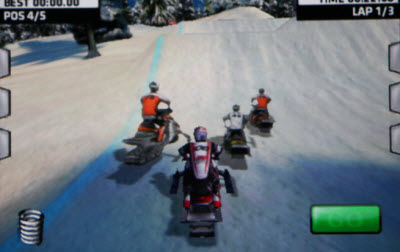 The device can run any of the 140,000 apps in the AppStore and uses the iPhone operating system. It can run the apps pixel for pixel, full screen. Apple is releasing a new software development kit for the iPad so developers can develop specifically for it. But the device will run the old apps fine. Apple showed off a full-screen game from Gameloft, and it looked pretty spectacular. Nova, a first-person shooting game with fast 3-D graphics, came out on the iPhone as a game app, but it has been modified to work with the iPad. Full screen, it looks as good as any PC game.

Jobs has left the stage at the moment. But the demos go on. Martin Nisenholtz from the New York Times introduced a new version of the newspaper for the iPad. The web site itself looks great, viewed via the Safari web browser. But the newspaper has also optimized the newspaper for the iPad in the past three weeks. You can scroll up and down, and save articles to sync to an iPhone. You can tap to change the number of columns, view slide shows, and resize with a pinch on the touchscreen. You can view videos that are embedded within stories. 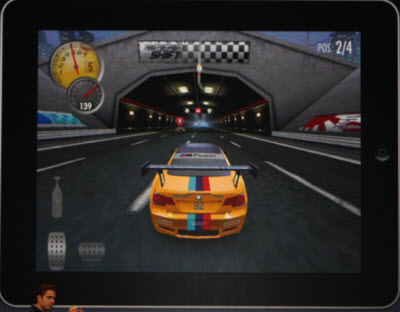 Steve Sprang, a one-man shop, is showing off Brushes, an art gallery and painting app for the iPhone that has been redone for the iPad. You can view pictures in full screen, in high-definition glory. You can share the art with others, and zoom in 32x on the paintings displayed. You can also paint all over the paintings or create your own. You can play back each brush stroke you made in creating a work of art, as an animation. That looks cool.

Travis Boatman of Electronic Arts took the stage to talk about the performance of games such as Need for Speed Shift racing game. The game can be steered by tilting the iPad, so it has the same accelerometer control as the iPhone. You can tap the screen to change gears while racing your call.

Jobs has retaken the stage to show off iBooks, an app for viewing electronic books. This stands on the shoulders of the Amazon Kindle, Jobs said. It has a view that looks like a bookshelf. You can view books in an iBook store to download, discover, and browse books on you iPad. Five large publishers are supporting it: Penguin, Harper Collins, Hachette, Simon & Schuster and McMillan. The iPad can show you iBook apps in color, black-and-white, and even videos integrated into the pages. There’s a cool virtual animation for turning pages.

Phil Schiller, senior vice president at Apple, is showing off iWork, Apple’s productivity suite, running on the iPad. You can view Keynote in landscape mode to view presentations. You can navigate through slides, scrolling up and down the slides with your finger. You can create tables, charts and other things. So the device is useful for creating as well as viewing. You can resize photos, rotate them and do other things as you create your slides and write captions for them. You can incorporate animations into the presentation as well. You can create spreadsheets using Apple’s Numbers program, all without a keyboard or a mouse. Tasks such as rearranging columns in a spreadsheet can be done with gestures such as swipes on the touchscreen. You just drag and drop components in the spreadsheet to rearrage items.