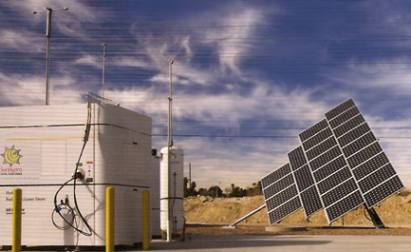 Among the many advanced vehicles set to hit the road in the next several years, a few under development at Daimler, Honda, Mercedes Benz and other automakers are being design to run on hydrogen fuel cells. But they will still hit the big roadblock facing their electric-powered peers: How will drivers refuel in a world of petroleum gas stations? What’s the point if you can only juice up at home?

Now a company called SunHydro is stepping up to answer the big question of infrastructure for hydrogen vehicles, pitching a so-called “hydrogen highway” extending from Portland, Maine to Florida dotted with 11 fueling stations tailored specifically to fuel-cell powered vehicles.

In addition to infrastructure limitations, cost has been the big barrier holding back transportation innovation. Hydrogen fuel cells in particular are incredibly expensive to build and maintain. Looking at SunHydro’s process, you can see why. Each station will split water molecules using solar power. This sounds incredibly clean, and will save the costs and emissions related to shipping hydrogen gas in tanker trunks over long distances. It’s unclear how SunHydro plans to foot this bill. Especially when you consider how few cars will require its services in the immediate future.

Building fueling stations for any type of advanced vehicle has always presented a chicken-and-the-egg style problem. Electric and hydrogen-powered cars won’t be widely adopted until consumers know they can reliably refuel on the go. But companies developing fueling stations won’t be able to afford mass expansion until they have some customers. For now, it looks like the government may need to step in the break the deadlock.

Better Place, a company that has pitched battery-switching stations for electric cars — allowing drivers to quickly swap out depleted batteries for new ones — just raised $350 million in private investment led by HSBC, but will clearly need millions if not billions more to make its vision a nationwide staple. Venture capital and equity will probably not be enough to change the game.

SunHydro says that each of its stations, with the technology as is, costs about $3 million to build. That’s not so infeasible — it already has the funding it needs from private investors. But if its solution is to be scaled, a lot of other pieces, including government aid, will need to fall into place. Automakers need to move their hydrogen models closer to market. Both Toyota and Daimler have pegged 2015 as the year fuel-cell cars will roll into showrooms, begging the question: What will SunHydro do for the next five years?