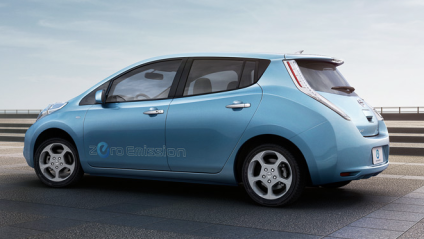 Yesterday, amid the iPad madness, the U.S. Department of Energy quietly released a press advisory suggesting that it would have big news for the green car industry today, and indeed it did. It announced a $1.4 billion loan to Nissan North America. The major automaker says it will use the money to set up a Tennessee plant to churn out its fully-electric Leaf model.

The announcement is significant for several reasons. Nissan is one of the first companies to actually receive the money it was promised. It got its loan guarantee in the same batch of announcements as Tesla’s $465 million loan guarantee in June last year. It’s clearly a favorite of the DOE. Second, it’s poised to create 1,300 domestic, green-collar jobs in a region of the country that desperately needs them (anyone who heard the State of the Union last night knows how important this is to the Obama administration).

Third, and perhaps most notably from a technology standpoint, Nissan is getting the support it needs to launch a new brand of electric vehicle innovation: charging pads that could potentially take the bulky cables and impractical charging times out of the equation. If they come to fruition, the pads could be installed in regular parking lots to juice up Leafs while they are parked away from home. They sound promising, and it’s nice to see the government betting on something unique.

Charging infrastructure has become an even bigger question recently, with battery-switching proponent Better Place receiving $350 million from HSBC and others. How will EV, fuel-cell and plug-in hybrid drivers fuel up while they are on the go? (Especially considering how tight the driving ranges are on some of the vehicles coming out in the next several years.) Electric charging stations like those installed by Coulomb Technologies are one idea. Better Place’s battery-swapping stations are another. Nissan is shaking things up by adding a third, seemingly low-maintenance option to the list.

The Nissan plant in question will not only assemble cars but also the lithium-ion batteries to power them — a good model for saving contracting and transit costs while developing complementary designs under the same roof.

Nissan’s strategy is to first market the Leaf as fleet vehicles to commercial customers before expanding it to the general market. This is a common plan, something Toyota says it will do with its hydrogen fuel-cell model by 2013 — same with Mitsubishi and its iMiEV. But at its peak production capacity, the Tennessee plant is expected to churn out 150,000 cars and 200,000 battery packs every year. At this rate, Nissan says the Leaf could help save more than 65.4 million gallons of gasoline annually.

The DOE’s $1.4 billion loan to Nissan is part of its much bigger $25 billion plan to accelerate the development and commercialization of electric and low-emission vehicles. Now that Tesla actually got its $465 million, and Ford closed on its $5.9 billion loan in September, is General Motors next? Or will the government continue to punish it for former sins? The success of the Chevy Volt could depend on it.