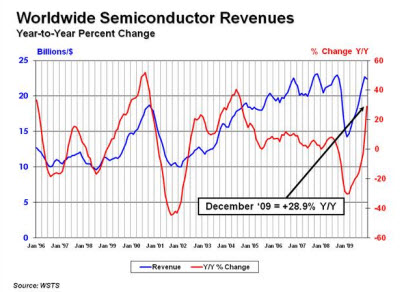 Global chip sales in December rose 29 percent from a year ago to $22.4 billion. That’s a healthy increase as the bellwether industry continues its recovery from the recession.

For the year, however, worldwide chip sales were $226.3 billion, down 9 percent from $248.6 billion, according to the chip industry trade group Semiconductor Industry Association. Chips are used in everything electronic and thus their sales are leading indicators of the health of the tech economy.

December sales were down 1.2 percent from November, when sales were $22.7 billion. The monthly sales figures represent a three-month moving average.

“2009 turned out to be a better year for the global semiconductor industry than expected,” said SIA President George Scalise. “A strong focus on inventories throughout the supply chain mitigated the impact of the worldwide economic downturn and positioned the industry for growth as the global economy recovers.

Sales in the fourth quarter were spurred by good demand for PCs, cell phones and consumer electronics. In 2010, the association predicts that unit sales of PCs and cell phones — which account for 60 percent of total chip sales — will rise in the low-to-mid teens in terms of percentage growth. Consumer electronics is expected to grow in the mid-single digits. Scalise said there are signs of a recovery in the enterprise sector and that the SIA expects that to continue to improve. China and India are continuing to grow and drive demand for chips, as are new categories such as netbooks and tablet computers.

For the first quarter, the SIA expects a return to normal seasonal patterns, which means a slowdown in Q1.