Ustream, which provides live video streams to web sites and cell phones, has raised $75 million in a second round of venture funding led by Softbank.

Tokyo-based Softbank has a number of investments in tech companies and operates the third-largest mobile phone firm in Japan. The funding will let Mountain View, Calif.-based Ustream expand in Japan, China, Korea and India.

Ustream plans to open offices, hire employees and invest in technology in those countries, according to a statement provided to Bloomberg by John Ham, chief executive of Ustream.

We’ve used Ustream technology to broadcast live video from the Consumer Electronics Show. With the equipment, a single person with a video camera and Ustream broadcasting pack can upload live video to a web site. 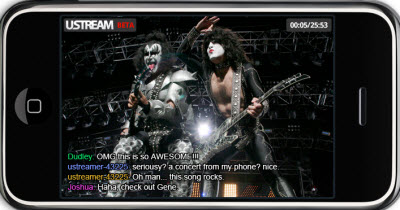 Users can also interact with each other in real time by using the Ustream Social Stream.Ustream had 50 million users in January. More than 1.5 million users have downloaded Ustream’s video streaming app on the iPhone.

The company was started in 2006 by Ham, Brad Hunstable and Gyula Feher. The original goal was to let overseas soliders stay in touch with families. Backers include DCM, which led an $11.1 million funding round in 2008, Gen Isayama, Labrador Ventures and Western Technology Investment.

Softbank has been active lately; in November, it increased its investment in RockYou, a Facebook application developer, and it has stakes in China’s Alibaba.com and Yahoo Japan. Rivals include LiveStream and Justin.tv.