Mplayit, maker of the mobile app catalog that lives inside Facebook, will release a report later today that lists the top games in their collection. Tetris, The Sims 3, and Wheel of Fortune are among the winners. So are Tap Tap Revenge and Rock Band.

The most interesting stat in the report is that while games account for only one in five of the 130,000 iPhone apps at Mplayit, they’re half the traffic. By contrast, games are only 30 percent of BlackBerry traffic and 20 percent of Android.

“iPhone developers are driving this phenomenon, putting out simply fantastic games that get people excited,” Mplayit founder and CEO Michael Powers said in a press release going out today. “But the developer catch-up is underway on Android.”

What about my BlackBerry? “Although BlackBerry is renowned for apps,” Powers said, “it continues to be underrated and overlooked as a games platform.”

Gaming interests vary across platforms, in ways you could probably guess. Music games like Rock Band are popular on the iPhone. Android users like games that use the phone’s GPS and camera, as well as augmented reality games like Barcode Beasties.

BlackBerry users prefer to read the Wall Street Journal on their phones. I’m kidding. Mplayit says they’re a less youth-culture oriented than iPhone and Android owners. They prefer TV and movie-related games like Deal or No Deal, and CSI Miami, and traditional card games like GT Blackjack and Aces Solitaire.

Mplayit has prepared an easy-to-read chart of the top games by phone type and game category. 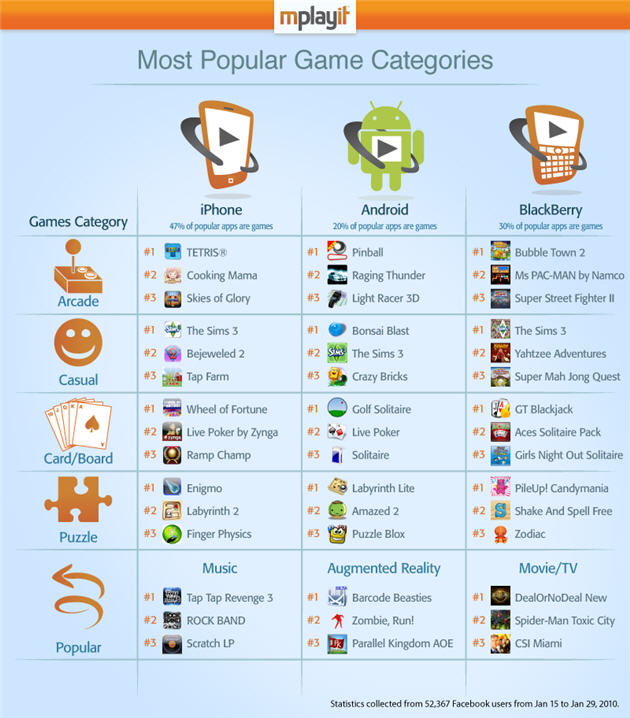