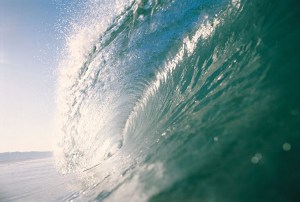 All signs point to wave power being a huge untapped resource. So far, only one commercial installation has been tried, even though the motion of the waves has the potential to generate between 1 and 10 terawatts. To put this in context, even just 1 terawatt would be enough to power a billion homes. Now, finally, Pacific Gas & Electric is stepping up to test new wave energy designs off the coast of Northern California.

The fact that a major utility is investing in the technology is a very good sign. So what was the hold up before? Apparently wave power poses many more engineering challenges than both wind and solar. Previous experiments have failed, and prototypes are expensive to build and install. At an estimated $2 million per installed megawatt, wave power has become the money pit of the renewable energy movement.

It also doesn’t help that many people confuse wave power and tidal power. They are different in several important ways. Tidal generation requires water turbines to be anchored in place underwater — turbines that are then turned by currents influenced by the moon. It doesn’t work very well in open water.

Wave power, on the other hand, is typically produced by the up and down motion of floating buoys being tossed on the surface of the ocean. It can be installed anywhere there is regular surf and doesn’t rely on the moon’s gravitational pull. This makes it sound easy — but wave power devices have to not only withstand powerful, gale-strength waves, but also salt depositions and extreme temperatures.

Despite these obstacles, PG&E says it’s applying to the U.S. Department of Energy for funds to get its California wave project up and running. If it receives the requisite financing, the utility plans to hold a contest between more than 20 wave power companies to come up with the most promising designs. In the end, three to four will be selected to actually install their prototypes off the coast of Humboldt County.

If all goes according to plan, PG&E will begin construction in 2012 on an installation capable of generating 5 megawatts of power by 2014. Right now, the whole planet runs on 4 terawatts of generation capacity. Considering that wave power could double this figure, PG&E’s attention is more than merited. It will be interesting to see if other big utilities follow suit.