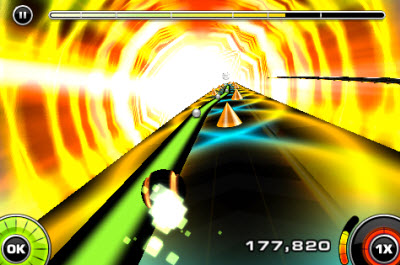 Tapulous has managed to maintain a strong business on the iPhone with its Tap Tap Revenge music games, despite the entry of RockBand from the big guys, MTV Networks and Electronic Arts. Now Tapulous wants to hit another home run with a new music app for the iPhone.

Riddim Ribbon is a “music racing” game, and it’s branded with the hot band The Black Eyed Peas, whose hit songs provide the soundtracks for the game. 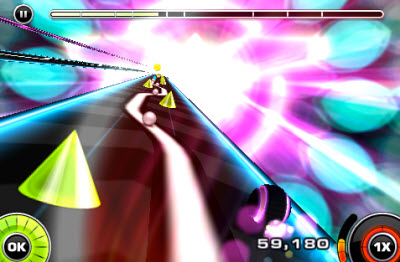 Tapulous will charge just $2.99 for Riddim Ribbon, compared to RockBand’s $6.99. But the game represents a huge amount of work by Tapulous to create a new music franchise, said Bart Decrem, chief executive of Tapulous, in an interview. The company’s success so far has been built on a single game, Tap Tap Revenge, which is like Guitar Hero for the iPhone.

On Apple’s devices, music games are a big deal. Tap Tap Revenge and its many variants have been downloaded more than 25 million times and are on a third of all iPhones and iPod Touches.

Using a famous band is a proven strategy for Tapulous, which has made lots of custom versions of its game featuring hot singers such as Lady Gaga. The game comes with three songs from the Black Eyed Peas, including the smash hits Boom Boom Pow, Meet Me Halfway, and I Got a Feeling. Since there are three difficulty levels, you can play a bunch of different combinations of games with the five-minute songs. You can add three more levels for 99 cents each. Included for free is a remix of Meet Me Halfway that has never been released in the U.S. 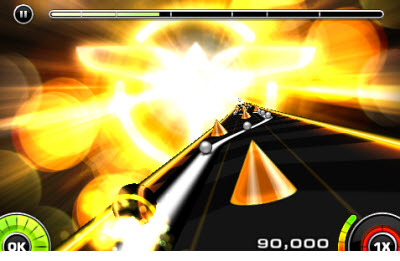 The game originated from a close collaboration with Black Eye Peas singer and producer, will.i.am. will.i.am and Decrem brainstormed on what they could do together. After 18 months, the result is Riddim Ribbon. Compared to something like Guitar Hero V on the consoles, the game is just a snack — something you can do in five minutes when you’re out and about.

In the game, the song plays and you see a yellow ribbon, sort of like Yellow Brick Road, snaking into the horizon on the iPhone’s touchscreen. You tilt back and forth to keep your rolling ball in the center of the ribbon as you speed down the road. The iPhone’s accelerometer senses which way you are tilting the device and translates that into twisting controls for the ribbon racing, much like tilting a screen to roll a marble in different direction’s in Sega’s classic iPhone game Super Monkey Ball.

Whereas Tap Tap Revenge is more passive, the player interacts with the music in Riddim Ribbon. If you crash too much, the music slows down and eventually makes a screeching sound. When the Black Eyed Peas shout “Boom! Boom!,” you have to make the ball jump through a couple of hoops. When the road forks in two directions, you have to steer right or left. Depending on which one you choose, you will get a different variation on the theme. So your game play impacts what kind of music you hear. There are eight different mixes of the three songs. As you play, you effectively create a new mix.

The game is yet another big bet that Palo Alto, Calif.-based Tapulous has made. On Dec. 20, the company made its Tap Tap Revenge game available for free. The idea was to hook people on the game and then let them purchase items such as new tracks through Apple’s new in-app purchase system. With it, players can simply tap on the screen to purchase an item from inside the game. Payment is automatic and painless. That bet paid off, since Tapulous sold millions of songs. The move was pretty effective against RockBand, which was selling for $9.99 at the time.

Decrem says the competition actually helps both companies. When Tap Tap Revenge became free, RockBand sold more copies. That’s because of recommendation engines such as Apple’s Genius feature, which recommends a music app to someone who already has one. At the moment, RockBand is at No. 12 among paid apps and Tap Tap Revenge 2 is No. 20.

Tapulous also exploits social sharing options at its disposal to create wider distribution channels. Those efforts have been so successful that Decrem believes the iPhone is reaching a new level of maturity as a platform for business.

At some point in the future, Decrem says, someone is going to prove that the iPhone can produce hits just as big as Zynga’s FarmVille games on Facebook. So far, the iPhone lacks the built-in virality that the social network has, which makes it far easier to spread new apps. But Decrem says it will happen in time on the iPhone as Apple keeps adding new features that help with discovery of new content.

“In the next two years, someone will figure out social gaming for mobile,” he said.

Decrem is bullish on the iPad. He thinks it will sell three million or four million units in its first year, far more than any other tablet computer. Android is starting to look appealing, but most of its promise lies in the future, as Google still has a lot of work to do to create a real market for games on Android that can be appealing to successful iPhone developers. Decrem thinks it will be worth it for Tapulous to port its games to run on the iPad in an optimal way.