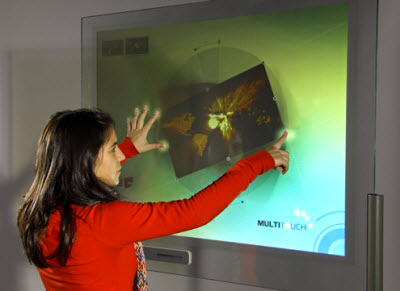 One of our most popular stories in recent days has been about Displax, a company in Portugal that plans to start selling a plastic film that turns any surface into a touchscreen.

By July, Displax said it is planning to begin commercial sales of its “multitouch skin” which can be thinner than paper. The ideal is to spread a nanowire-laced plastic film over any flat or curved surface — glass, plastic or wood — so that it becomes interactive.

The problem with our interview with Miguel Fonseca, chief business officer at Displax, was that he omitted a key detail. While Displax makes the controller that enables multitouch contact with the plastic film, it doesn’t make that plastic film itself.

The film is actually a product created in 2004 by Visual Planet, a London-based company. Mike Cole, commercial director at Visual Planet, contacted us and let us know that the company’s ViP Interactive Foil has been shipping for a while and Displax is one of its resellers.

“I think the core message is that what they are claiming about being the first to develop a flexible foil base touch sensor is incorrect and most of the press has focused on this fact,” Cole wrote in an email. “They have developed a controller only. They tied in our technology in the release so they could promote theirs and make more of a splash.”

Cole said that ViP would be happy to sell its foil to Displax to be part of its “multitouch skin” solution, but there is no agreement in place right now to do so. The two companies have been good partners for some time, but there is a point of contention. Displax is making its own controller to enable multitouch skins that use the plastic film. The controller is sort of the brains that takes the signals from the film and translates them into input signals for a system. It’s not a trivial thing, but the plastic film seems like the more interesting invention.

Cole said that Visual Planet is planning on doing its own controller to go with the plastic film. Hence, these two companies are kind of on a collision course. After Cole brought this up to us, a spokesman for Displax emailed the following message in response.

“We would like to clarify Displax’ relationship with Visual Planet and its development of the multitouch technology launched at ISE. Displax Multitouch Technology is a technology solution. Displax is the developer of the unique multitouch controller that enables the detection and processing of multiple simultaneous signals from the foil and has several patents pending for this product. Visual Planet supplied the foil on which Displax built its prototype (unveiled at ISE) and is currently one of the foil suppliers that Displax is in discussions with to commercialize its technology. Displax has been happy with its professional dealings with Visual Planet and would be pleased to continue to work with this partner as one of its foil suppliers moving forwards. However, the company is continuing its discussions with other providers of this foil technology too. Displax still expects to ship its multitouch products in late second quarter/early third quarter 2010.”

There you have it. If these companies can cooperate, then I suppose we’ll see a very interesting technology hit the market by mid-year. But the picture is a little murkier than was related to me for the first story.