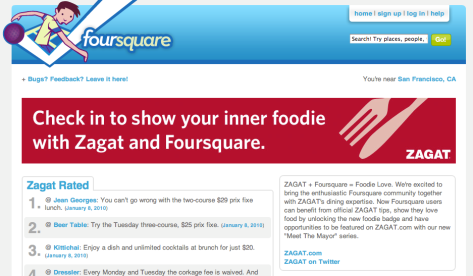 As competitors with rich content offerings like Yelp close in on its core market, Foursquare is rallying to fight back with a series of big media partnerships.

The New York Times reported today that the company will unveil a partnership with Zagat tomorrow where users can earn a ‘Foodie’ badge if they check into the right restaurants. It comes on top of a deal the location-based social networking game signed with Bravo last month, awarding players themed badges based on the cable channel’s TV shows. Ad Age is also reporting that Foursquare is also signing deals with Warner Bros. and HBO.

The deals give Foursquare a line of revenue and better content offerings at a time when the space is becoming increasingly cutthroat. The features Foursquare popularized like badges, mayorships and “check-ins,” where you temporarily share your location with friends, have been copied by several other competitors. At the same time, there’s a looming threat that the app’s popularity will become overshadowed by bigger companies like Yelp and even Facebook itself if its releases its own competitive features.

At this point, aside from the location data and its active community, Foursquare lacks a deep set of content it can offer to keep people from defecting to other services. These deals help fill in gaps; Zagat will push tips and recommendations to Foursquare’s users.

This also helps Zagat stay relevant as it faces its own threat from Yelp. The company hired Goldman Sachs to try and sell the company for as much as $200 million in 2008. Zagat eventually decided against sale in mid-2008 as there were few takers and as the credit crisis roiled markets.