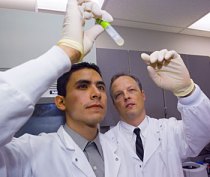 Google CEO Eric Schmidt wants you to believe that Google’s 52-second “Parisian Love” ad that ran in the third quarter of yesterday’s Super Bowl was a spontaneous decision to take a popular YouTube video and “share it with a wider audience.”

Aw, a present. You shouldn’t have!

They didn’t. We got an email this morning from Martin McNulty, director of online ad agency Forward3D. Maybe because he’s a Brit, McNulty can see past Super Bowl mania.

“Google is nothing if not experimental,” McNulty wrote. “What better way to learn the true potential of the world’s most expensive slot than to buy it.”

Exactly. This is the company that tested 41 shades of blue, and demanded that one of their designers test 4-pixel borders on a page versus 3 pixels and 5 pixels to justify his artistic eye.

By spending $3 million to run a popular YouTube clip during the third quarter of Sunday’s game, Google was able to monitor and measure the exact effect of a Super Bowl TV ad on Google’s own traffic. My only question is, what took them so long?