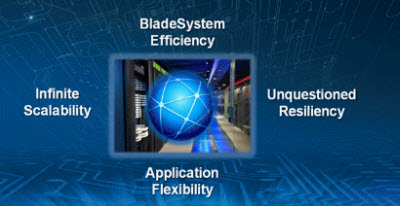 The number of transistors, or basic on-off switches that control the flow of electrical signals in a chip, is about twice as much as what Intel and other big companies normally put in a chip.

Kirk Skaugen, vice president of Intel’s Architecture Group, said Intel will be able to put eight microprocessors together in a single server system. Each microprocessor has four cores, or computing brains, on one chip. Hence, a system can be built with 32 computing cores, and some companies may be able to do more than that, based on their own custom work.

The chip design, code-named Tukwila, is years late and has been ridiculed for a long time. But Intel argues that this chip will be more attractive to the big corporations and scientists that it is aimed at. Skaugen said in a webcast today that the economics behind the new Itanium chips are better because it shares characteristics with Intel’s x86-based Xeon server chips.

The new Itanium chip uses the same chip sets, QuickPath interconnection, and other common infrastructure as the Xeon chips. While Itanium remains the high end of Intel’s product line, Xeon is the workhorse chip family for corporate servers. The new QuickPath interconnect replaces a standard Intel bus and can transfer data nine times faster than before. The 9300 series chip runs at 1.73 gigahertz.

Martin Fink, senior vice president of Business Critical Systems at Hewlett-Packard, said his company will likely make announcements about computers using the Intel 9300 series chips. Other supporters include Bull, Inspur, NEC, Hitachi, and Supermicro. Fink said early results show performance is 2 – 9 times better than that of existing systems. Intel runs on 10 different operating systems, but about 85 percent of the volume is on HP’s HP-UX version of the Unix operating system.

IBM, meanwhile, is launching systems that use its latest rival chip, the eight-core-per-chip Power 7, today. IBM’s systems will have as many as 64 cores. The two rivals will go head to head in battles to get their chips and systems inside mission critical computers, such as those that control stock markets.

Pella, an Iowa-based company that uses Itanium chips in HP Super Dome computers, uses Itanium-based systems for its enterprise-wide computing infrastructure. The company expects to use the new Intel chips as it upgrades the HP computers over time.

The new Itanium chip is Intel’s seventh-generation microprocessor based on the Itanium 64-bit architecture. Skaugen said Intel has two more Itanium series chips — code-named Poulson and Kitson — scheduled to launch in the coming years. Intel plans to introduce its follow-up chips every two years or so. Skaugen said the Itanium systems business has become a $5 billion market since the first Itanium chip launched in 2000, after more than a decade of development. It easily represents Intel’s biggest design investment.

“We know we had a few delays, but it’s better to get this stuff done right,” Skaugen said.

One of the reasons for the delays on Tukwila was a marketing decision to switch from one kind of memory, Fully Buffered DIMM, to a standard DDR memory design.