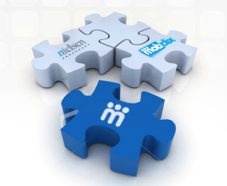 Mobile advertising is one of the hottest fields we report on at VentureBeat. Gartner analysts expect it to be a $7.4 billion market by the end of 2014. Not as big as Google’s $20 billion-ish ad economy, but a viable space for which media planners will design and place ads.

For ad buyers, it’s a big deal that Mobclix will soon be hooked up to Nielsen’s ad targeting data. Nielsen’s PRIZM is built around a database that segments markets by lifestyle and consumer behavior. Nielsen’s ConneXions slots consumers into 53 different demographic categories. Under the terms of this agreement, Mobclix will be able to resell PRIZM and ConneXions to mobile ad networks and publishers.

By hooking Nielsen’s data for reselling within Mobclix’ system, it will be possible to serve different ads to 150 different audience segments of consumers on their phones, or maybe their iPads. In San Francisco, ad buyers will be able to target Mission hipsters and Marina yuppies separately. 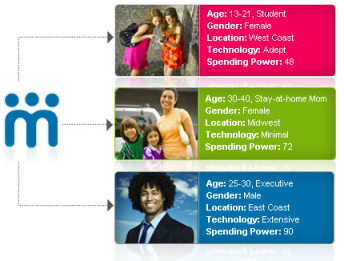 Moreover, some mobile advertisers want to move beyond basic brand-logo mobile ads. They want to drive sales from people’s smartphones. Dell, for example, buys ads that goad mobile users to stop thinking about it and click now to buy a netbook from their phone for $275.

I got Subramanian on the phone to explain exactly how PRIZM and ConneXions will work with Mobclix. Both, he said, are tools that online ad buyers already use. Nielsen created them after polling hundreds of thousands of people in the real world. PRIZM tracks online consumers with a cookie to determine their interests. All told, Nielsen can now target 890,000 households.

Young Digerati
-Age 25-44
-White,Asian,Hispanic,Mix
-Upscale
-Young Digerati are tech-savvy and live in a fashionable neighborhoods on the urban fringe. Affluent highly educated, and ethnically mixed, Young Digerati communities are typically filled with trendy apartments and condos, fitness clubs, and clothing boutiques, casual restaurants, and all types of bars – from juice to coffee to beer. 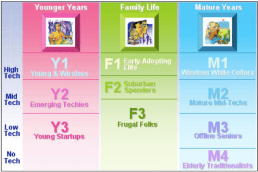 ConneXions divides online consumers into more traditional demographic segments by ZIP code and household income. Many ad buyers know exactly which of these they want to hit.

Many ad buyers have used PRIZM and ConneXions already, selecting categories to go with their display (banner) ads and search ads. Now, they’ll be able to punch in Nielsen categories when buying ads on Mobclix.

I’m sure the Mobclix-Nielsen partnership will draw more advertisers into mobile markets. But there’s a huge presumption many technologists make: Advertisers will be compelled to move to online and mobile advertising because it’s so precisely measurable.

No, advertisers will migrate to mobile networks after they’ve been proven to work widely and well at building brand awareness and driving sales. Media planners — including Google’s marketing department — don’t spend millions on Super Bowl ads because they’re stupid. They do it because it works.

Get to know some brand managers who haven’t tagged themselves with the alternaculture “geek” label. These people spend $300 billion a year — ten times the size of the online ad market — on TV, print, radio and billboards because those media are widely understood and have well-known effects on buyers. Nielsen’s hookup to Mobclix isn’t the finish line for mobile advertising. It’s the starting line.