December 2009 data from comScore puts Facebook’s unique US visitor count at nearly 112 million. With a total estimated US Internet population of 205 million, that means that 54% of all Internet users are on Facebook. MySpace captured a still strong 57 million users in December — 27% of the Internet population.

Social Networking by the Numbers, a study I conducted using comScore and Experian Hitwise data from December 2009, details US data on visitor counts, time spent, and growth rates for the top 10 purely social networks (not vertical networks like LinkedIn and Flixster) over the past year. Click here for the complete article and presentation.

Some surprises in the comScore data – 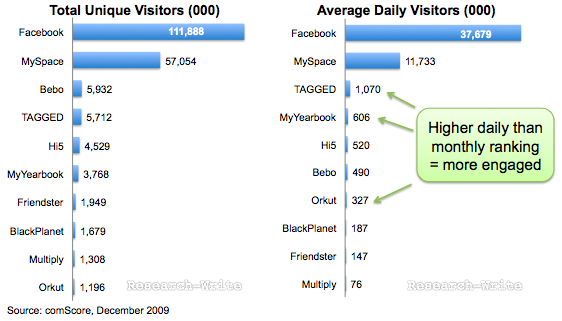 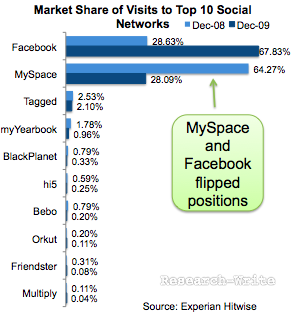 When taken in sum, these data suggest that all of the attention directed toward Facebook in the past year is warranted. But the 57 million highly engaged users on MySpace are nothing to sneeze at, and the second-tier networks have millions of users. Expect them to begin to integrate with Facebook or MySpace over the course of the next year, just as vertically oriented sites have done (Flixster, a movie review social network is integrated with MySpace, and Goodreads, a site where users share book recommendations, is integrated with Facebook).

There’s no shame in doing what you do best, keeping your users happy, and allowing them to grow their network by sharing their activities on the largest social networking site in the world.