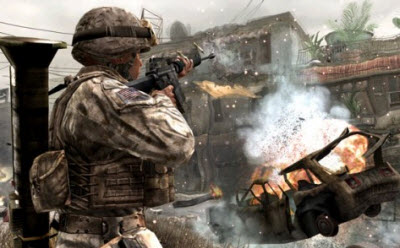 Activision Blizzard reported its best quarter in its history as it reported strong sales from Call of Duty: Modern Warfare 2 as well as other games launched during the holidays.

Modern Warfare 2 had the best launch of any game in history and it helped the Santa Monica, Calif.-based company, which has become the biggest independent video game publisher in the world, blow past analysts expectations. Modern Warfare 2 sales have topped $1 billion since its launch in November.

The coming year looks good for the company and its Blizzard Entertainment division. Starcraft II fans (and there are more than 10 million who played the first game that launched in 1997) need not worry; the company said it is on schedule to launch the game in the middle of this year. And World of Warcraft fans will get their Cataclysm expansion pack sometime this year.

In the first fiscal quarter, Activision Blizzard predicted revenue would hit $525 million, below the consensus estimate of $771.7 million. Earnings per share on a pro forma basis is expected to be 2 cents, below consensus estimates of 8 cents a share.

After hours, Activision Blizzard’s stock price is up to $10.77 a share, from its closing price of $10.09. But the company is shy about predicting a strong year in 2010. This year, the company anticipates full-year revenue of $4.4 billion, below consensus estimates of $4.8 billion. Pro forma earnings per share are expected to be 70 cents, below estimates of 73 cents. Industry wide, Activision Blizzard believes software sales will be flat or down in the U.S. and Europe in 2010. It expects that industry portable and PlayStation 2 sales will be down double digits, and it expects that console game sales will be up somewhat.

Blizzard Entertainment’s Starcraft II is now entering into a worldwide closed beta test with thousands of gamers. There is no launch date yet, other than mid-year. The company will also launch a new iteration of its Battle.net online game service, which is being revamped as a social network.

On top of that, Blizzard is introducing World of Warcraft: Cataclysm, a new expansion pack for its hugely popular massively multiplayer online game, sometime this year. The Cataclysm game includes a disaster that changes the landscape of the established game. Players will be able to tap into the game via iPhones and other devices. Blizzard will also expand the pet store inside the game; that generates purchase revenue on top of the subscription price.

Blizzard is still awaiting approvals for its Chinese partner, NetEase, which is still negotiating about the fate of the game in its largest regional market. The game was halted in China in the summer of 2009 after the Chinese government interceded when Blizzard shifted operators from The9 to NetEase. The game resumed operations in September and continues to do so. But the game is still under review, and Chinese authorities are also reviewing an older expansion pack, World of Warcraft: Wrath of the Lich King.  This uncertainty has slowed the game’s growth in China, but on a worldwide basis, WoW still has 11.5 million subscribers. NetEase has also resubmitted a second expansion pack, the Burning Crusade, (already released in the U.S.) for approval by Chinese authorities.

Other big titles coming from the Activision Publishing division are new games based on the Call of Duty, Guitar Hero, Tony Hawk, together with other well-known titles such as Blur, True Crime, Spider-Man and Bakugan.

Music games were a disappointment in the fourth quarter and Activision Blizzard has cut back on its investments in the category. The company launched 26 different products in music on a bunch of different platforms in 2009; in 2010, it will launch fewer than 10.  But it says it has more than 50 percent share of the music game market and will launch new Guitar Hero and DJ Hero games in the second half of 2010. The DJ Hero game was the best-selling new music game in the fall of 2009.

As for social games on Facebook or mobile, Activision Blizzard Bobby Kotick said the company is reviewing the market and isn’t yet sure of the profit potential of games such as FarmVille on Facebook. The new platforms have promise, but Kotick said that the company will exploit those opportunities in a thoughtful manner, as it has always done when it considers launching games on new platforms, he said.

There is, he said, a lot of clutter, low margins, and low barriers to entry in the mobile and social network game markets right now. In general, Activision Blizzard foresees 20 percent growth in high-margin online game businesses in 2010. Those numbers include the WoW business.