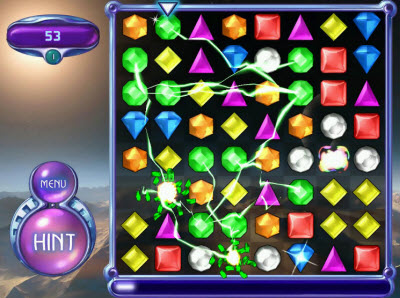 PopCap isn’t saying how many dollar sales the game has generated since its launch in 2000. But in August, 2008, the privately held Seattle company said that it has generated more than $300 million in revenues. The aim of the game is to match three jewels in puzzle.

Now it’s worth asking: Will the next 50 million copies be free? No one can deny that Bejeweled emerged during a unique time in game history, pioneering the try-before-you-buy business model. The company posted the game for players to try out on portals such as MSN. Then the players could decide whether they wanted to pay $19.99 to buy the game permanently. It was a risky move, but PopCap had to do something different in the midst of the dotcom collapse.

That download-based business model has been fried by the assortment of free content. Downloadable games are now selling for $6.99 and they seem to be losing market share to free-to-play web games and Facebook games. Bejeweled Blitz has debuted on Facebook to give users one-minute challenge games. But it will be interesting to see how PopCap chooses to monetize its games going forward in the age of free.

The company says it continues to sell a copy of Bejeweled every 4.3 seconds and that the game is now one of the ten-best-selling games of all time. Full told, it has been downloaded 350 million times. With free-to-play online versions now available, it’s estimated that a half billion people have played Bejeweled. All of that has allowed PopCap to build a staff of 260.

It’s no wonder that PopCap raised $22.5 million in the fall to expand into social media. We’ll be hearing from John Vechey, co-founder of PopCap, on a panel at GamesBeat@GDC on Next-Generation Social Games.