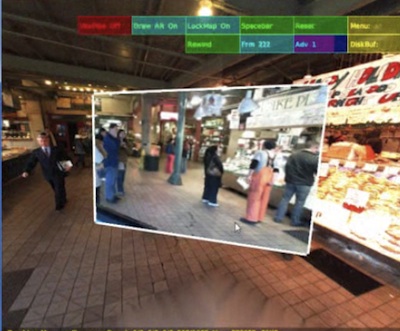 Microsoft is announcing some cool new features in Bing Maps today. The map service’s revamp in December already made it more visually impressive than Google Maps, its established competitor, and these new features build on that lead.

The feature that’s now live in a preview version is called Streetside Photos. It pulls images from photo-sharing site Flickr that have been geotagged and approved for reproduction, and overlays them on the existing streetside imagery. So when you look at a location on Bing, you’re not just seeing the default photo set that Microsoft has created, but hopefully a whole range of photos from Flickr. That might be useful, for example, if you want to see what a neighborhood looks like at different times of the day.

The maps’ Streetside mode will integrate with Microsoft’s World Wide Telescope project, so you can see the stars above when you look up in streetside view. It will also incorporate a feature called “indoor panoramas,” so that you can explore interior locations. (The image above comes from Seattle’s Pike Place Market.) And users will also be able to overlay live video on a map, so you can see what’s happening somewhere at that very second.