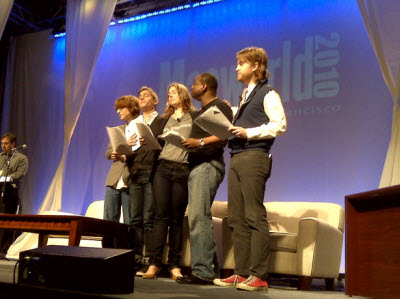 After mimicking Steve Ballmer’s “monkey dance” video — Pogue ran around the stage, screaming and jumping on the furniture — he interviewed the AutoTune the News team.

He showed several of their best clips, which were real crowd pleasers on the big screen. He asked them to describe how they got politicians to appear to swear. They take the end of a word, as in “those geese are cooked,” one of them gets under his bed with a microphone to eliminate room echo, and swears into a microphone until he’s got a good match to the speaker’s voice in the middle. They punch the “f–” sound into the video, align it with the “–ked” at the end of cooked, then put a bleep in the middle vowel sound. Result: a convincing “those geese are f–ked.”

Pogue (below, far right) then called out former Star Trek: The Next Generation cast member LeVar Burton (above, second from right) to play Steve Jobs in a parody of It’s A Wonderful Life. 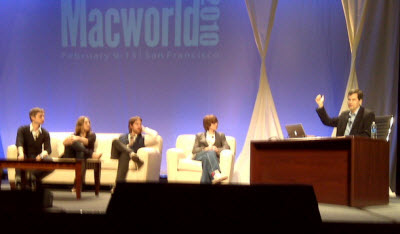 In a talk-show-style chat after the play, Burton told the audience that his Star Trek character, Geordie LaForge, was named after a Trek fan with cerebral palsy who had passed away. Burton played a blind crew member of the starship Enterprise. His prosthetic visor, he said, actually rendered him blind on the set. “We needed to be sure you never saw my eyes, so in addition to adhesive tape [to seal the edges], it was literally screwed to my head.”

Pogue closed with a live version of his iPhone musical. He said he was once pulled to the head of an airport security line by a TSA agent who barely spoke English but blurted out “You the man from iPhone video!”