In Arthur Hailey’s 1971 novel, Wheels, the hero has an epiphany while looking at the Apollo Lunar Module: “Ugly is Beautiful.” Watching the iPad launch coverage, I realized that Apple limits its innovation potential by never building anything ugly. “Ugly is beautiful” isn’t just an epigram. It has substance as an innovation design principle. There are theoretical and empirical reasons to believe that revolutionary products are, by necessity, ugly-beautiful (as an effect, not a cause: a technology is not revolutionary simply because it is ugly). 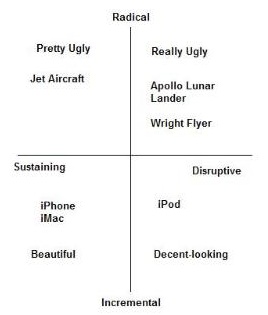 Clayton Christensen, in The Innovator’s Dilemma, taught us that every innovation falls somewhere on a 2×2 diagram where the two axes are radical/incremental and disruptive/sustaining. Disruptive innovations pioneer new markets (usually growing on the edges of complacent incumbents); sustaining ones sell more into existing markets. Radical innovations are technically challenging; incremental ones are not.

Revolutionary innovations, especially disruptive and radical ones, are by necessity ugly, because of the heavy constraints placed by the primitive first-generation engineering on the user experience. Apple doesn’t do ugly, which is why they don’t venture into the radical half. As The Economist noted, “Rather than developing entirely new product categories, [Apple] excels at taking existing, half-baked ideas and showing the rest of the world how to do them properly.”

In innovation theory, it’s called the fast-follower strategy. But it may not work for Apple this time, because there is nobody to follow. Nobody has gotten tablets – a radical-disruptive problem – even roughly right yet.

It turns out revolutionary technologies are born ugly for two big reasons:

1. Open Innovation: For anything truly radical-disruptive, it takes many democratically-contending peers with different aesthetic visions to build the first working instance. Arguably the most ugly-beautiful technology ever was the Apollo-Soyuz test project (ASTP), a rare cold-war era collaboration between the US and the USSR (pictured). The point of the experiment was to demonstrate international space cooperation by showing that spacecraft born of different design paradigms could dock together.

2. Metaphor Incoherence: Central conceptual metaphors haven’t yet cohered, and vestiges of inherited metaphors remain. For example, the Wright Flyer I was a Frankenstein’s monster because its wheels were inspired by bicycles, its wings by kites, and its controls by birds. Later, hinged ailerons, inspired by rudders on ships, joined the fun. The whole thing didn’t really cohere until nearly 35 years later, with the last of the World War II airplanes.

Apple has tried to create a converged media device that simultaneously takes on the Kindle, Netbooks, portable DVD players, televisions, and hand-held gaming devices. That puts the intent in the “radical and disruptive” quadrant. Just look at the features people are asking for in a hypothetical competitor to the iPad if you don’t believe me:

Apple doesn’t do Flash, and it controls the App Store with an iron fist. Not open innovation, you might say, but you’d be imputing the wrong motives to Apple. I don’t think they want to create proprietary, closed platforms. Openness is a beautiful idea and Apple, I am sure, likes it just for that reason alone. But Apple’s users don’t want openness. They want curated experiences that the many of us would consider gilded cages. Daniel Tenner in TechCrunch Europe and Tekla Perry in the IEEE Spectrum both point out that the iPad is a device for late adopters. In fact both conjecture 70-year-old retirees as the main market.

On the face of it, this makes no sense. Isn’t the Apple demographic the young, hip, early-adopter Bohemian crowd? Aren’t retirees the AOL crowd? Does it make sense to put the two demographics in the same bed? Actually it does. For completely different reasons, both the Bohemian and the Retiree want aesthetic classicism. Which brings us to my second point: metaphor incoherence and the iPad.

Classicism – a focus on form over content – in design leads to complete and coherent metaphor schemas. For example, everybody is raving about the beautiful bookcase metaphor on the iPad. To me it represents a backwards step from the Kindle. Bookshelf? Beautiful page flipping? Apps that extend the miseries of newspapers and magazines? Could you be any more hung over with the document metaphor?

But both the Bohemians and the Retirees like metaphor coherence, even at the cost of functionality, which is why the bookshelf will work for them. The metaphor-that-will-replace-the-document is too incoherent to guide design that Bohemians will admire and Retirees will understand.

Apple displays some schizophrenia here, though. It is trying to tell content producers to think creatively about merging multiple media: text video and audio. Considering the beautiful bookshelf, it is a case of “do as I say, not as I do.” It is telling that the only technology to have pulled this off successfully is Flash.

There is one good reason to eschew an entire half of the innovation landscape, and two bad ones. The good reason is this: You identify what your company does really well and focus on that. Limiting yourself out of self-awareness keeps you alive to your blind spots and weaknesses. Many would say that Apple’s core competency is usability. This is actually not true. If Apple’s core competency were usability, they’d do chunky and knobby when necessary. But no, when platonic classicism collides with usability, in the world of Apple, usability loses.

That’s why we get awkward round mice. That’s why we get hard-to-use flat and flush mechanical keyboards when soft keyboards are impossible. That’s why Apple exits from sectors that are inescapably tied to visible mechanical complexity, like printers. This is why Apple is reluctant when it comes to things like cameras, that can’t be manufactured entirely out of platonic solids, and battles cable-spaghetti Hydras with Herculean ferocity, while the rest of us merely untangle our cables and move on. Though this iPad vs. a Rock post is a joke, it gets at the deep uneasiness Apple feels around visible mechanical engineering messiness.

Which brings us to the two bad reasons – and by bad, I mean for shareholders – that might be behind Apple design: Either Jobs himself is driving Apple design, or users are. The former creates a single point of failure, the latter creates a self-limiting market driven by tyrannical users.

Apple’s design output reflects a mix of these two. First, as the New York Times suspects, Apple’s biggest asset is Jobs-as-auteur: Apple represents the “auteur model of innovation,” observes John Kao, a consultant to corporations and governments on innovation. In the auteur model, he says, there’s a tight connection between the personality of the project leader and what is created.

To extend the movie-director analogy (and remember, Jobs came back to Apple via Pixar), Jobs-as-Auteur is something of a Wes Anderson (Fantastic Mr. Fox, Darjeeling Express), creating visually closed, tight universes. I suspect Apple fans love those movies.

The Apple aesthetic isn’t just the pure Jobs aesthetic, though (that would be NeXT). The primary-colored bubblegum madness sparked off by the original iMac (which resulted in an entire decade and half of industry convergence towards what a colleague of mine calls “Fisher-Price design schemes”) is almost certainly not Jobs’ own preference, but a cowpath he spotted the Bohemians treading, and paved.

With the iPad, we’ll find out if Jobs has spotted another major cowpath being created by your retiring-baby-boomer aunt and her cohort of late adopters. My suspicion: no. Seniors will not tolerate the favoring of platonic aesthetics over usability, no matter how close the iPad user experience looks to the AOL user experience on the surface. My 72-year old Dad will want chunkier technology.

Un-Apple: The Philosophy of Ugly-Beautiful

For better or worse, Apple has framed design discourses for nearly 15 years. Alternate design paradigms inevitably start out as un-Apples before they find their voice.

You can see this massive influence in any significant Apple-era design paradigm. Microsoft pretty obviously follows Apple’s lead. The Droid is military-industrial, an obviously reactionary, un-Apple aesthetic. Google, being a smart company, has quietly, in recent years, attempted to rebel against the Apple aesthetic by moving away from “rounded corners and saturated colors.” Along with the likes of WordPress, they are pioneering something of an “unboxed” aesthetic in products such as the Google Reader. (The Chrome logo is an uncharacteristic slip).

But these design rebellions are superficial. To craft a true design rebellion, you must go where Apple doesn’t go, innovation-wise. What characterizes “Ugly is Beautiful” is a cobbled-together tinkerer look. You can’t fake this. You have to be in the disruptive-radical quadrant, otherwise you look like you are merely executing a simple idea incompetently.

Apple, in its first decade, grew from these roots, as this iPad post from a tinkerer poignantly illustrates. And it is to tinkerer-aesthetics, which Apple has abandoned, that we must appeal, to create revolutionary technology that sells dissonance and openness rather than coherence and closure. What does this tinkerer want? The tinkerer wants his or her technology to reflect a deep, atavistic sense that the real world is messy. The tinkerer distrusts things that are just too polished, because the real world is not. Tinkerers cannot bring themselves to believe that complex problems can be solved that easily. Charlie Brooker said it best in the Guardian.

This kind of customer will never buy Apple. To go after this market, you must adopt the Ugly-is-Beautiful aesthetic of dissonance, watch David Lynch movies (Mulholand Drive, Lost Highway), and pave the cowpaths less traveled by.

Venkatesh Rao is project manager at Xerox’s trailmeme.com, an ugly-beautiful beta project that mixes Ruby on Rails, PHP and Java and makes heavy use of Flash, while keeping an eye on HTML5; although whether or not it’s revolutionary is the for the market to decide. Rao is also an aerospace engineer, and a serious blogger at ribbonfarm.com.