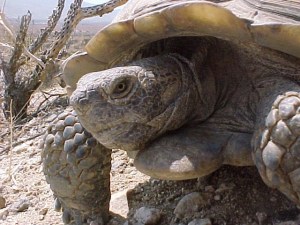 BrightSource Energy, the company developing California’s first new solar power plant in over two decades, has decided to scale back plans for its massive new solar thermal plant (PDF) in the state’s desert due to concerns over an endangered species of tortoise.

Called the Ivanpah Solar Energy Generating Station, BrightSource’s project will be shrunk from 4,000 acres to around 3,500 to keep it from interfering with rare plant species and to cut down on the number of tortoises that will need to be relocated to another part of their habitat. The plant’s capacity would drop from 440 megawatts to 392 megawatts.

This is the second time in recent months that environmental concerns have blocked renewable energy development in California. In December, Senator Dianne Feinstein pitched legislation to make about 1 million acres of the Mojave Desert part of a protected monument zone so that wind and solar companies couldn’t build there.

This is a strange situation, considering that it’s usually environmentalists and liberal interests that are promoting alternative sources of energy. Now it looks like alternative energy companies are being sandwiched between conservatives, who would rather see funding diverted to nuclear and fossil fuel efforts, and leftists who are prioritizing conservation over green industry.

The Ivanpah Station would cover the selected parcel of land — owned by the Bureau of Land Management — in mirrors, each angled to concentrate sunlight on a fluid to convert it into steam to then turn turbines. The reduced number of mirrors still has the potential to generate enough electricity for 140,000 households.

BrightSource’s new plans, just submitted, will have to go through the same prolonged approval process as the previous design. It hopes to garner approval by the end of 2010 — that’s the only way the company will still qualify for a loan guarantee from the U.S. Department of Energy. But this could be overly ambitious. The Bureau of Land Management already has more than 150 applications on its desk for solar projects spanning California, Arizona, New Mexico, Nevada, Colorado and Utah.

Then again, BrightSource does have some powerful and influential backers, including Google, Morgan Stanley, Chevron and BP. It might also have the state government in its corner, seeing as how the Ivanpah Station would go a long way toward hitting California’s mandate that 33 percent of its energy be generated from renewable sources by 2020.