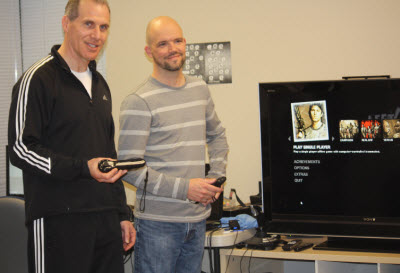 Sixense Entertainment‘s TrueMotion technology is an interesting entry in the market for controlling games using hand gestures. While other companies are capturing motion using 3-D webcams, Sixense has taken a different route.

The Los Gatos, Calif.-based company led by Amir Rubin (pictured, left) is using a magnetic field to detect your movements as you wave wireless controllers around the air to control a game. The system has a base magnet that connects to your game PC and a couple of handheld wireless controllers that you use to maneuver through the game. The net result that it gives a player “six degrees of freedom” for controlling a game.

Gaming peripheral maker Razer has taken an exclusive license to make game peripherals for the PC based on the Sixense designs, and it will debut in the fall. In a partnership with Valve, Sixense-enabled games will appear on the Steam digital distribution network so players can play their favorite games with gesture controls. 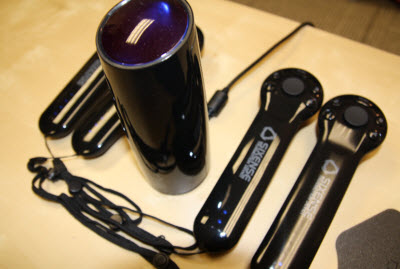 I visited the company’s headquarters and played Valve’s Left 4 Dead 2 using the controllers. It made me slightly dizzy, but that’s what Left 4 Dead 2 does for me anyway. But I was surprised at how good a job the company did at integrating gestures with the game. Left 4 Dead 2 moves so fast that it is a very hard game to control, but I found I was shooting zombies very quickly in the demo. So if they can do this game, other games are a breeze. It took the company just a couple of weeks to adapt Left 4 Dead 2 to their controls.

There are analog controls on the controllers that you can use to supplement the gesture control. It winds up being a system that is very Wii-like, but much faster and more accurate.

The magnet is a regular magnet, not an electromagnet. So it won’t wipe out the hard disk on your Tivo video recorder, but it can detect movement in a 12-foot radius around a base gadget. It has advantages and disadvantages. A 3-D webcam, such as what Microsoft will use in its Project Natal gesture control system for the Xbox 360, can capture any movement it sees. It can capture your whole body movement, but it won’t capture anything that is obscured by an object. So if you put your hand behind your back, the Natal cameras won’t detect that movement. Also, you don’t have to calibrate a Sixense controller, whereas you do with the Wii, which uses accelerometers and infrared detectors to determine its position.

The Sixense control system can only detect what you’re holding in your hand, but it can accurately track whatever you do with that controller, even if it passes out of the line of sight. The Sixense controllers also have analog pads that you can move in lieu of twisting your wrist. So if you’re turning around in a game, you don’t have to turn your wrist at odd angles. Up to four people can play at once.

Rubin said that the controllers can be tuned to handle any type of gesture or game. For instance, when you are moving slowly and pointing at something on the screen, the controller will filter out the shaking of your hand so that the pointing will be steady. When you are holding a katana (sword) in your hand, there is no filtering because it needs to capture your movement at high speed. In a shooting game, you could do blind fire, meaning you could point your gun around a corner and shoot wildly without exposing yourself.

“There are a lot of different tactics that you can use that you can’t do with the mouse,” Rubin said. “It’s much closer to reality.”

The system works better than the Wii or mouse and keyboard in these respects. If you’re throwing something in a game, the Sixense system can precisely detect how hard you intend to throw it. So you can toss a grenade a few yards, throw it as far as you can, or even drop it behind you as you’re running from someone. When you’re holding a sword, you can slice left or right, or up and down (Yes, think lightsaber, as was noted by id Software game guru John Carmack, after he used Sixense).

To make all of this happen, Sixense had to design a chip set that goes in the controllers, as well as the rest of the control system. It will give its software development kit to game developers for free. It will collect license fees associated with the sales of the hardware.

The Sixense folks say Razer will debut peripherals with its own look-and-feel, but it will use the functions that Sixense showed off. Razer is involved because it thinks that high-end gamers will love the competitive advantage this type of controller gives them over others.

Sixense was founded in October, 2007, and is self-funded. Its chairman is Ari Arad, producer of movies including Iron Man and the Incredible Hulk. The company has eight employees.

We’ve snagged Jeff Bellinghausen, chief technology officer at Sixense (pictured, top right), to speak on our panel on Disruptive Innovation at GamesBeat@GDC. The event will be on March 10 at the Game Developers Conference in San Francisco.

Be sure to check out the video below of Sixense’s Josh playing Left 4 Dead 2.

Sixense shows off its gesture-control system for games from Dean Takahashi on Vimeo.