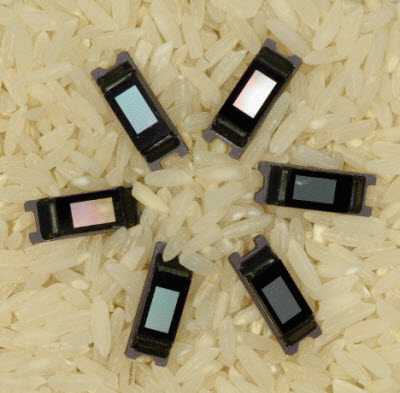 Texas Instruments is announcing a new chip set that will allow pico projectors to be built into smaller devices across a wider range of products.

To date, these small projectors have been built into more expensive cell phones and chunky projectors. But with the nHD chip set from TI, the devices can be built into small phones and handheld gadgets. Using the first generation of pico projectors, you can project images on conference walls for presentations, but the image quality isn’t the greatest and the projectors add some bulk to the devices in which they are embedded.

Unveiled at the GSMA Mobile World Congress show today in Barcelona, Spain, these chip sets are the latest to take advantage of digital light processing, or DLP. TI pioneered these chips years ago, building millions of tiny mirrors that were micro-machined into silicon chips. At first, they were useful in rear-projection TVs. But as those products melted away under the onslaught of flat panel TVs, the DLP technology made its way into tiny projectors that can project DVD-quality images on a 60-inch wall or screen.

The pico projectors have made their way into more expensive phones, but now the projectors with good image quality can fit in less expensive, more power efficient gadgets, said Frank Moizio, manager, DLP Emerging Markets business, in an interview.

Gadgets and phones with the new nHD chip set will be out later this year. Manufacturers are already evaluating them for use in a wide array of products, including cameras, gaming projectors, media players, notebook computer accessories and stand-alone projectors. At the Consumer Electronics Show, a dozen manufacturers showed products using TI’s previously announced high-end chip set. Those manufacturers include Samsung, Optoma, LG and Hewlett-Packard. Those new products showed how much progress pico projectors are making, Moizio said.

The nHD chip set can display images with 640 x 360 resolution. The contrast ratio is better than 1,000 to 1. It enables a wider color gamut, is power efficient, and is smaller than earlier models, allowing the chip set to be built into tinier products. The devices can now be 20 percent thinner and 50 percent smaller.

TI plans to start mass production in the second quarter and expects new products to be out within a year. At some point, pico projectors will likely be as common as camera phones.